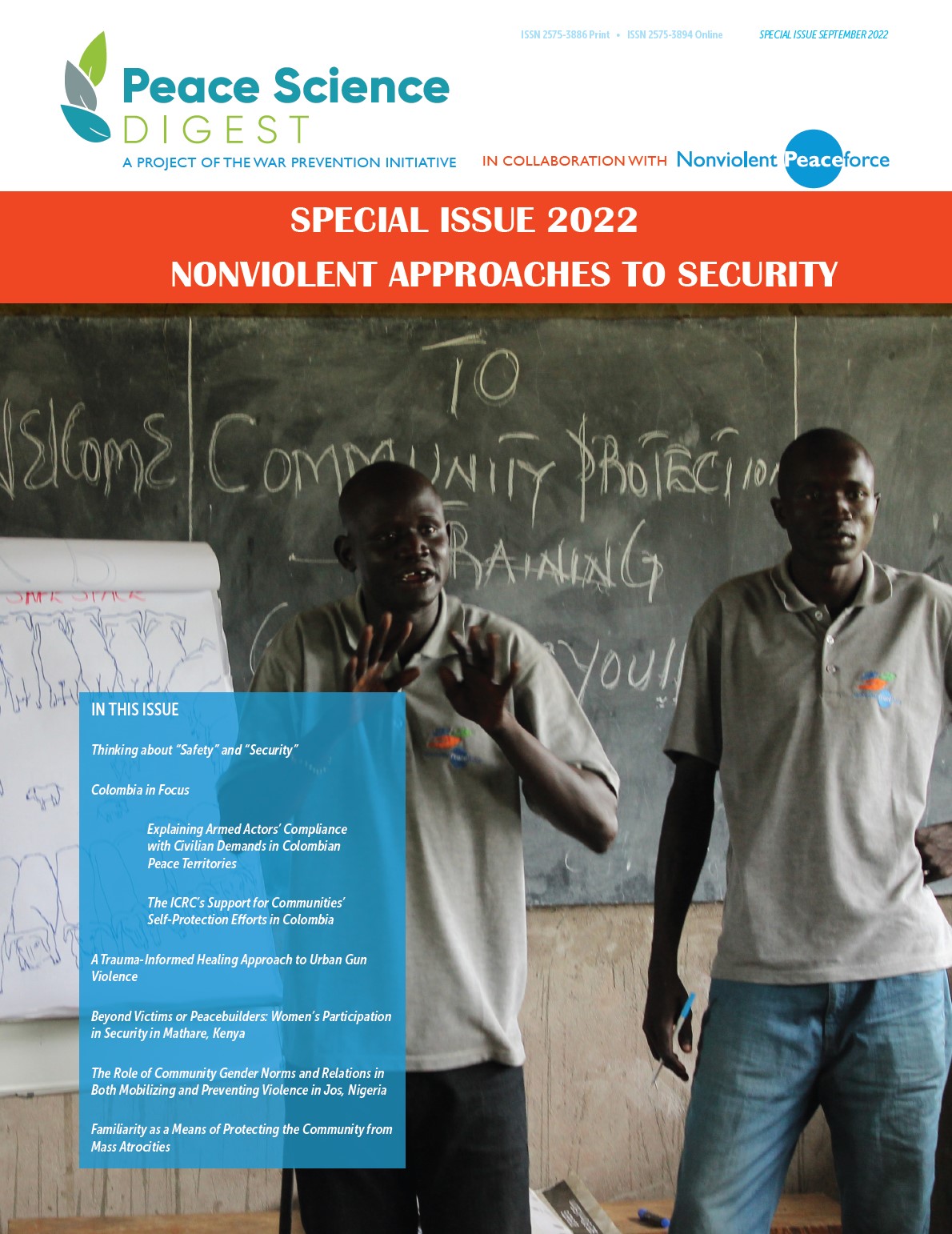 We are pleased to present our special issue on nonviolent approaches to security in collaboration with Nonviolent Peaceforce. This issue focuses on nonviolent, civilian-led strategies for protection and violence prevention in various violent contexts, ranging from civil war and intercommunal violent conflict to urban gun violence. As distinct as these are, they are all contexts that would traditionally serve as justification for militarized interventions—whether by military forces abroad or by militarized police forces at “home”—in the name of security and civilian protection. Instead, this special issue highlights unarmed, nonviolent approaches already being adopted and employed around the world by communities themselves—and/or by international UCP (unarmed civilian protection) or humanitarian organizations whose presence has been requested— to protect civilians, prevent further violence, and enhance community safety. Drawing attention to these nonviolent approaches to security provision, therefore, provides a crucial response to the question: If not military intervention (or militarized policing) when civilians are being threatened by violence, then what?

Despite the particularities of each context examined here, common themes emerge that help us understand how these nonviolent, civilian-led protection and violence prevention strategies work. In particular, research explored in this issue highlights the critical importance of the following to creating security: addressing unmet human needs (that otherwise can correlate with participation in violence); building and drawing on relationships with a range of stakeholders, including armed actors; analyzing power and dependence relations and leveraging these for protection; and cultivating and using particular norms (including gender norms) to influence behavior away from violence.

Another common theme relates to a major challenge faced by these efforts—namely, that some activities and actors are not even seen as security activities or actors, despite the fact that they significantly contribute to people’s safety. It is so deeply engrained that security is provided by armed police and soldiers, and that forceful, physical action is required to respond to a security threat, that the absence of these is interpreted as passivity in the face of violence. How could a bunch of people talking in a room prevent a massacre? How could women walking each other to a well provide protection from sexual violence? How could a group of farmers threatening to leave a village change the behavior of an armed group? Gender hierarchies that value—especially in the realm of politics—activities and attributes associated with masculinity (dominance, force, autonomy) while marginalizing those associated with femininity (empathy, relationship-building, nonviolence) may go a long way in explaining the invisibility of nonviolent, civilian-led security strategies. Another part of the explanation may lie in the undeniable kinetic (and destructive) visibility of militarized, violent responses. A “show of force” is hard to miss—and in this way is very much a performance of concern, of defense, of security; whether it actually makes people any safer is another matter altogether.

Indeed, one of the key moves to make nonviolent, civilian-led security strategies visible is to notice how militarized responses to security threats frequently exacerbate these threats, rather than mitigating them. For instance, the infliction of violence (even if meant to be protective or defensive) solidifies group identities and entrenches polarization; it makes it harder for the target group to back down for fear of looking weak; it creates more trauma and reinforces the victimization narratives that may be motivating the other group’s violence in the first place—all of which reinforces cycles of violence, increasing insecurity for everyone involved.

By contrast, the utterly banal and unflashy daily work of sustaining relationships between polarized groups, of supporting youth at risk of violence in their pursuit of meaningful work in the community, of calling up an armed group commander to remind him of his group’s stated commitments to international humanitarian law, of calling out a boyfriend for joining in an armed attack of an opposing group’s neighborhood rather than fawning over his heroism—these actions work at the level of the actual causes of violence: polarization and dehumanization of enemy groups, unmet human needs including the desire for recognition, deflection of responsibility and lack of accountability, norms of masculinity that celebrate violence.

And the movers behind these security practices are not decorated military generals or well-armed soldiers but, well, regular people—mostly local civilians but also sometimes civilians from other communities or countries who have come to lend their presence to these civilian protection and violence prevention efforts. Noticing their daily security-seeking practices means noticing civilian agency in war zones and other violent contexts where civilians are usually seen simply as victims to be saved.

This ability to see civilians as agents of their own security and to notice these nonviolent activities as sources of protection and violence prevention can, perhaps counterintuitively, have radical implications for broader practices of global security. As long as “common-sense” thinking holds that violence is necessary to confront violence, cycles of violence will persist, as all they need to do so are otherwise “peace-loving” people who feel their security is threatened and think a violent response is therefore necessary, even if regrettable (which of course generates the same response in the opponent). Demonstrating that other, nonviolent responses to violence can be effective at creating security—while also highlighting the ways militarized responses can exacerbate insecurity—interrupts this assumption that ultimately feeds cycles of violence, from the community level to the international level. In other words, we don’t have to wait for everyone else to be on board—for all the aggressive, violent actors in the world to be transformed—to be “safe enough” to adopt nonviolence ourselves. We can respond nonviolently in the imperfect and violent world as it is. Doing so would not only take the fuel out of violent conflagrations but also free up resources otherwise blindly devoted to military institutions, enabling us to invest instead in renewable energy jobs, education, food security, global health, and so on—efforts that would actually make real people more secure, not to mention address global inequality and some of the root causes of violent conflict. Nonviolent responses to violence do not guarantee safety—just as violent responses do not—but at least with them we stand a better chance of enacting the “change we wish to see.”