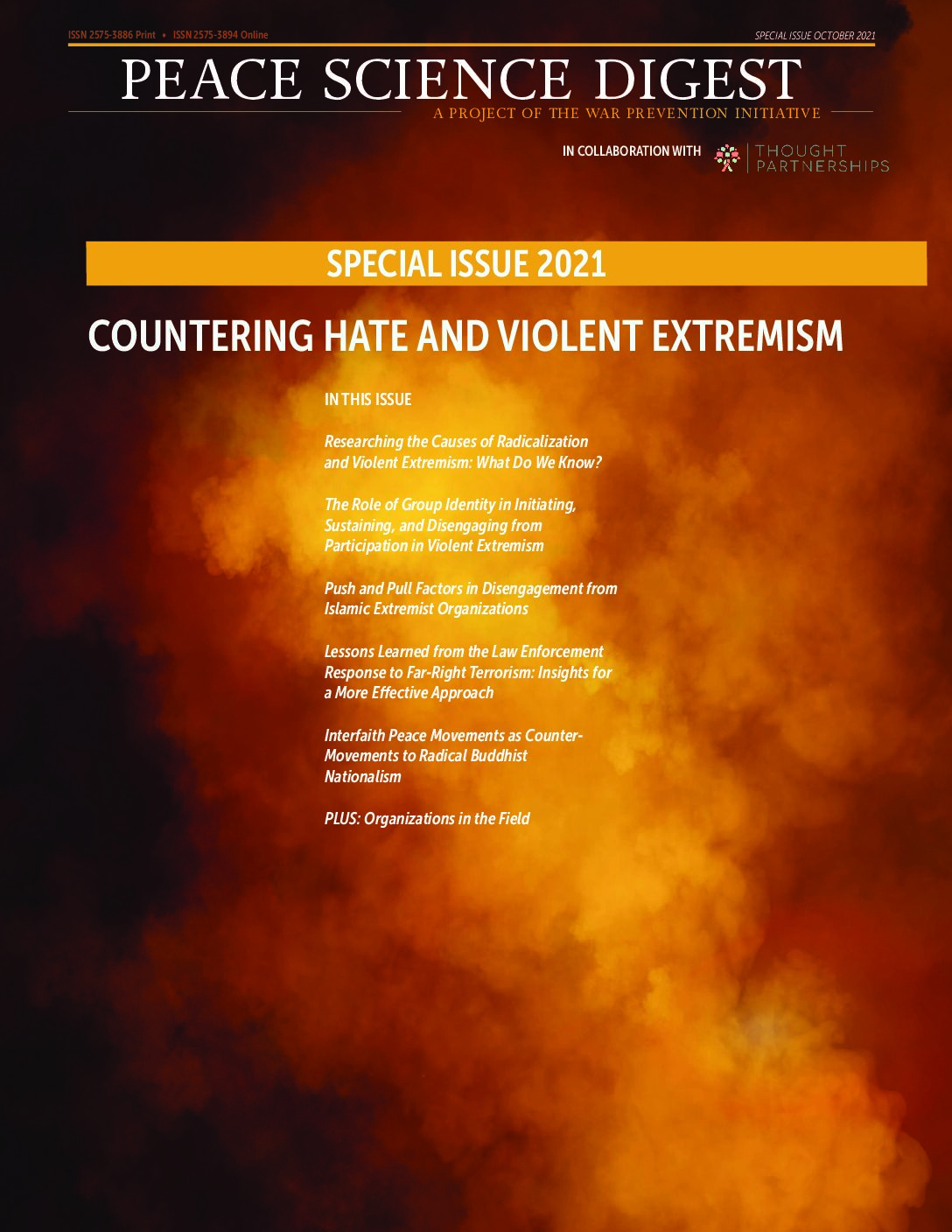 We are pleased to present our special issue on countering hate and violent extremism in collaboration with Thought Partnerships. Despite its urgency, this topic is an ethically and conceptually thorny one. In light of the January 6, 2021, insurrection at the U.S. Capitol and broader rise in armed extremist groups, the Peace Science Digest editorial team was compelled to better understand the drivers of radicalization and, importantly, the nonviolent approaches to supporting deradicalization and disengagement from violent extremism. At the same time, any engagement with scholarship and policy-making on countering violent extremism (CVE) risks complicity with the militarized and discriminatory counterterrorism policies of the Global War on Terror (GWOT), now marking its 20th anniversary. More fundamentally, what do we even mean by “violent extremism,” by “radicalization”? For instance, one of the research articles discussed in this special issue defines radicalization as “the path that leads an individual to endorse or commit a politically motivated act of violence.” It may be straightforward to say that a neo-Nazi or ISIS fighter has been radicalized, but would we also say that those who support or participate in armed liberation movements have been radicalized? What about soldiers who participate in state militaries, which also use violence in pursuit of political goals—are they radicalized? To complicate matters, although “radical” is often—as in the definition above—used to describe the means employed towards a particular end (usually in reference to violence), it can also be used to describe the extent of the change desired—change that can also be accomplished through nonviolent means, as research examined in the Peace Science Digest has frequently demonstrated.Conflating radical change with violence only reinforces widespread assumptions about the efficacy of violence in certain situations.

This last point brings us to an insight worth unpacking further: Perhaps we should lean into the ambiguity around what exactly constitutes radicalization and violent extremism, as this ambiguity helps us see the continuum between violent extremism and other more widely accepted, “benign” forms of violence. Militarism—through its legitimation of violence as a necessary and effective tool for creating change or defending communities—makes violent extremism possible. Once violence is seen as necessary and effective, any ideology can fill the space needed to justify and motivate its use. The effort to rein in and prevent violent extremism is therefore inseparable from the effort to challenge militarism more broadly.

Yet, over the past twenty years since the September 11th attacks, militarism has dominated approaches to countering terrorism and violent extremism. Not only is militarist counterterrorism policy deeply counterproductive for the reasons given above, but it is also far removed from addressing the main drivers that move individuals to adopt violent ideologies and commit acts of violent extremism globally. The analyses in this special issue demonstrate that militarized approaches to countering violent extremism fail because they ignore the broader social and political conditions that foster so-called radicalization, while also reinforcing the logic undergirding violent extremism and the polarization that fuels its existence.

Academic research reveals that radicalization is a social process: Individuals are compelled to join extremist organizations by the very human need for group belonging and identity affirmation, as well as through the practical mechanisms of social networks, particularly existing relationships with group members. Other material benefits—like employment or education opportunities—are also relevant. Disengaging from such organizations—not to mention disowning extremist attitudes and ideologies, the process of deradicalization—is incredibly difficult and requires a long-term, systemic approach: not exclusively focusing on the perpetrators of violence but also transforming the social, political, and economic structures that render individuals susceptible to hate speech, extremist recruitment, and the lure of violent ideologies. One key insight is that the same social needs and mechanisms that can draw individuals into extremist groups can be crucial to motivating and facilitating their departure—as maintaining or building relationships with individuals outside of these groups can expose members to narratives that delegitimize violence, while also providing them with other sources of identity affirmation and belonging.

Additionally, the analyses demonstrate the critical, and sometimes overlooked, role that non-governmental organizations and social movements play in countering radicalization and violent extremism. These actors often are better situated and have better access to build trust with individuals and organizations engaged in extremist violence, especially in comparison to government-led, carceral, or militarized approaches.

PLUS: Orgs in the Field