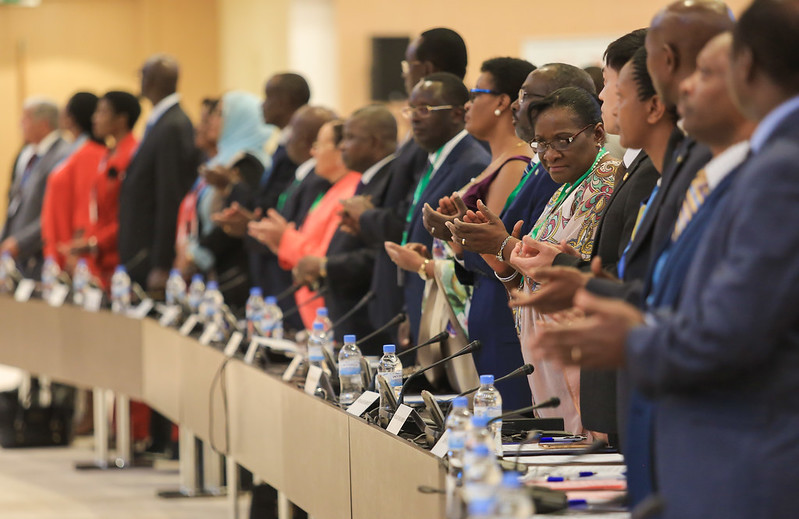 In the case of the Pan-African Parliament (PAP):

With an interest in the role of third-party actors in conflict resolution, Kebede Kassa Tsegaye examines the Pan-African Parliament’s (PAP) efforts between 2004 and 2011 in four conflict-affected member states of the African Union (AU): Côte d’Ivoire, Sudan, Libya, and Somalia. Through its internal debates, fact-finding missions, convening of various stakeholders, meetings with diplomatic representations, and periodic communications, the PAP played an impactful role in conflict resolution. The PAP advocated for civilian protection but was also concerned with protecting African governments from external intervention from European or U.S. forces that could potentially prolong the conflict. Depending on the circumstances of the conflict and its obligation to member states, the PAP navigates its position by emphasizing civilian protection or African sovereignty. Notably, the PAP adjusted its approach as circumstances changed on the ground, demonstrating the utility of flexibility and there are multiple avenues of influence in conflict resolution for third-party actors.

In Côte d’Ivoire and Somalia, the PAP emphasized civilian protection in its conflict resolution work. After a 2005 peace agreement in Côte d’Ivoire, the PAP’s fact-finding missions in 2007 and 2011 provided insight into continuing election violence. The PAP’s subsequent recommendations centered on addressing the root causes of conflict through “dialogue, sustainable development, and democratic transformation.” In Somalia, the PAP consistently expressed concern for civilian safety during the conflict and focused on intervening at crucial moments in the protracted conflict. As reports emerged suggesting Ethiopian troops in Somalia were stoking nationalist fervor in May 2011, a PAP subcommittee called on the Ethiopian government to withdraw troops and for the international community to establish a ceasefire and facilitate a national dialogue, which aligned with the PAP’s interest in protecting civilians. This recommendation was based upon a thorough assessment of the complex conflict involving clan-based warlords, Al-Qaeda, and external interventions by Eritrea, Ethiopia, and the U.S. Unlike other cases examined, namely Sudan and Libya, the PAP did not view U.S. involvement as a threat to sovereignty on the continent because, in the PAP’s view, it aligned with their interest in protecting civilians. Despite the PAP’s calls for conflict resolution, condemnations of the conflict, and support of AU and UNSC (United Nations Security Council) decisions, the Somali conflict endures. The PAP supported the UNSC decisions and international community’s diplomatic efforts because they aligned with the PAP’s prerogative to cease hostilities and protect civilians. The Côte d’Ivoire and Somalia case studies demonstrate the impact of PAP fact-finding missions and recommendations to address root causes of conflict as well as its concern for civilian protection.

In Sudan and Libya, the PAP’s adaptivity to changing conflict dynamics and adherence to continental sovereignty are revealed. When the International Criminal Court (ICC) issued arrest warrants for Sudanese President Bashir for alleged war crimes and crimes against humanity, the PAP issued support for the Sudanese government. Prior to the arrest warrants, PAP fact-finding missions were instrumental in facilitating and monitoring AU peacekeeping missions in Sudan. However, the PAP’s position must account for the interests of AU members. Objecting to the ICC warrants was necessary to adhere to the “general will” of the continent’s leaders. Further, African leaders have long criticized the ICC as disproportionately targeting African country leaders. In Libya, the PAP’s efforts also reflected the concern for continental sovereignty in reaction to NATO intervention. Until 2011, the PAP supported UNSC resolutions to protect Libyan civilians. Yet the PAP interpreted NATO’s intervention as “regime change and a possible occupation of Libya by Africa’s former colonial powers—Britain, France, Italy—and the U.S.” It condemned NATO’s military aggression and requested the international community stop NATO’s actions immediately. This view was reinforced by observations of other external interventions by U.S. and NATO, namely in Iraq and Afghanistan, and the PAP was concerned for the long-term stability of the continent. Once Libyan leader Qaddafi was captured and killed, the reality on the ground shifted and a new regime emerged. Thus, the PAP reassessed its position, renewed its emphasis on civilian protection, and reminded the new government of obligations to law and order and the need for accountability for human rights violations.

Conflict resolution is a collaborative process involving many parties. Thus, the PAP’s supportive role in providing a platform for parliamentary diplomacy, deliberative democracy, and participation for a wide range of actors, including civil society, cannot be overlooked. In its direct and indirect conflict resolution efforts, the PAP emphasizes the need to address root causes of conflict, namely lack of democracy, weak institutions, and governance issues related to transparency and accountability. Additionally, the PAP adjusts its approach to changing realities on the ground, as demonstrated in the Sudan and Libya cases. The PAP maintains a consistent interest in civilian protection, yet when the collective security of African nations is threatened by external aggression that could potentially prolong the conflict and threaten civilian protection, the PAP adjusts its position to protect continental sovereignty and reflect the will of African leaders.

Several African country leaders have raised concerns that the ICC inappropriately targets Africa, in that all of the ICC arrest warrants are for Africans. In 2017, Burundi went so far as to withdraw from the court, stating that “the ICC has shown itself to be a political instrument and weapon used by the west to enslave.” African leaders, some of whom have been targeted by the ICC, claim the institution is racist and a neo-colonial power structure bent on maintaining Western control of the continent. While these accusations come from leaders accused of war crimes, genocide, and other crimes against humanity, it remains suspect that the ICC has not targeted non-African leaders. Even if not racist, at the very least the ICC could be considered ethnocentric in its construction and application of international law.

NATO, or the North Atlantic Treaty Organization, is a Cold War era security pact meant to counter Soviet influence. After the Cold War ended, foreign policy experts and peace advocates argued that the alliance was no longer necessary and should be disbanded. Yet, NATO has continued to expand eastward from its original 12-nation alliance to include Central and Eastern European countries, culminating in a 30-member country alliance. As NATO expanded, it engaged in various military interventions beyond European borders to create “new imperatives for itself“ and address “global issues that worried US leaders.“ These external interventions by NATO, primarily in countries of the Global South, sparks warranted fear of re-colonization via regime change and subversion of the right to self-determination of formerly colonized nations. These concerns, coupled with the devastating fallout of NATO intervention in the Middle East, are troubling for Global South countries on the receiving end of NATO aggression. African leaders have legitimate concerns that NATO aggression will ultimately yield control of their countries back to their former colonial powers.

Marcetic, B. (2022, March 7). The Orwellian attacks on critics of NATO policy must stop. Jacobin. Retrieved March 15, 2022, from https://jacobinmag.com/2022/03/russia-ukraine-war-invasion-nato-expansion-criticism