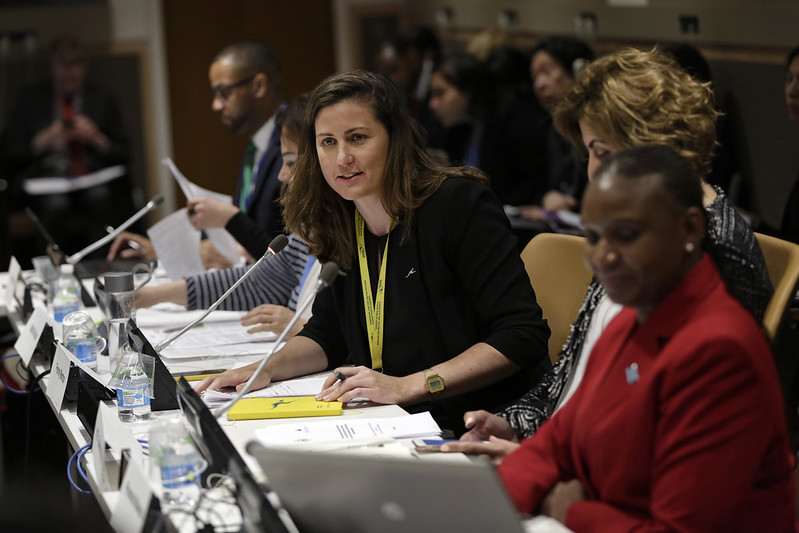 While a feminist ethic of care opens up space for attentiveness and responsiveness to others’ needs, it also centers an analysis of power relations at all levels of human interaction, resisting domination and guarding against one’s exploitation in the course of caring for others. A feminist foreign policy animated by this productive tension can be especially potent at creating necessary change and limiting violence.

Over the past decade, several countries have adopted a so-called “feminist foreign policy” (FFP). But what does it mean for a foreign policy to be “feminist”? And what are the implications of one approach to FFP versus another? Fiona Robinson critically examines more mainstream approaches to FFP informed by liberal cosmopolitanism. She argues that, although some of the principles guiding mainstream FFP involve the inclusion and empowerment of women, this formulation of FFP paradoxically reinforces “gender power relations and Western liberal modes of domination” between the West and other countries, thereby “undercut[ting]…feminist goals.” Instead, a critical feminist ethic of care provides a more fruitful starting point for a “potentially radical and transformative” FFP, “one that reveals and troubles the binary gender norms” that shape hierarchical international relations and thereby make it difficult to build empathy and relationships.

The author develops a three-part argument, drawing on the cases of Sweden and Canada—both early adopters of FFP, from 2014 on. First, she examines FFP’s development in both countries and its framing as “ethical” foreign policy. Both countries center women’s rights as human rights, women’s full inclusion and representation, and funding for “gender equality and women’s empowerment,” noting how these can also facilitate other “visionary” goals like peace and development. One of the author’s central claims is that these FFPs take shape around key principles that are pre-formed and ready to be applied as “feminist” policy around the world, usually by Western countries. Paradoxically, the supposed “universality” and “objectivity” of these principles—qualities that are gendered masculine—function to silence or marginalize as feminine knowledge framed as “local” or “particular,” thereby reinforcing “relations of domination” between Western countries and others and “undermining the mutual respect necessary for collaboration and deliberation.”

Second, this idea is developed further in the example of Swedish/Canadian relations with Saudi Arabia during crises in 2015 and 2018, both involving Swedish/Canadian public criticism and demands regarding the Saudi government’s treatment of women’s/human rights activists—in one case calling it “medieval”—as well as subsequent diplomatic and economic fall-out. The author highlights how these manifestations of FFP—and its moral certainty—draw a clear distinction between Saudi Arabia (“authoritarian, backward and violent”) and Sweden/Canada (“democratic, progressive and peaceful”), echoing colonial/racial hierarchies. The author argues that we should resist the temptation of these clear-cut binaries and gender hierarchies between superior and inferior countries that make understanding difficult and instead situate crises in their broader context, noticing the factors that have shaped countries’ relations over time.

Finally, the author argues that a “feminist ethic of care can offer a different, and potentially more transformative, way of thinking about feminist foreign policy”—“challeng[ing], rather than reinforc[ing], gendered binaries” that produce hierarchical relations—due to three of its qualities in particular: relationality, contextuality, and revisability. Relationality refers to the idea that one’s selfhood or identity emerges only in relation to others. Understanding selfhood this way in turn influences how we think about ethics as well as knowledge. If we are who we are through others, then acting ethically entails responding to others with “attentive listening, patience and understanding,” ultimately requiring us to “balance[e] the competing needs of real, embodied others.” In addition, knowledge necessarily emerges from human beings embedded in social relations and therefore cannot be detached, neutral, or purely objective, making it important to notice “who makes knowledge claims,” from where, and with “what degree of power.” The contextuality of moral judgments in feminist care ethics refers to the attention given “to the particularities of social location, historical background, structural conditions and relationships between relevant moral actors.” Likewise, such judgments entail revisability—an ethos of humility and uncertainty with regards to what one thinks one knows. An approach to FFP informed by feminist care ethics would recognize that there are no firm, certain principles on which to base an “ethical” foreign policy, as ethical judgments are always context-dependent and revisable; nor are there perfect courses of action, just “better or worse courses of action” that respond to particular contexts and power relations on various scales.

The author is ultimately arguing that it matters which ethical orientation guides FFP. While traditional ways of approaching FFP may counterintuitively reinforce patriarchal “relations of domination” between “powerful, Western states” and “racialized Others” on whom they impose their firmly held principles, a FFP informed by feminist care ethics is more likely to facilitate the transformation of global/local relations to which feminists aspire through its ability to clarify and resist patriarchy’s role in both maintaining hierarchy in global politics and belittling the practice of empathy. By resisting the binaries that make domination possible, a feminist ethic of care opens up space for people to “feel free to respond to others with careful attention, attentive listening and responsiveness, and to do so without losing or sacrificing themselves.”

Feminist care ethics should not be mistaken for an approach to human relations that only attends to the needs of others without looking out for oneself, as the word “care” might suggest. Rather, while it opens up space for attentiveness and responsiveness to others’ needs, it also centers an analysis of power relations at all levels of human interaction, resisting domination and guarding against one’s exploitation in the course of caring for others. This is important to note, as otherwise Robinson’s critique of Sweden’s and Canada’s response to Saudi human rights abuses could come across as enabling these behaviors through “attentive listening” and “understanding”—much in the way U.S. President Biden’s recent relationship-repairing visit to Saudi Arabia has been criticized as providing much-sought-after legitimacy to Crown Prince Mohammed bin Salman despite his alleged complicity in the murder of journalist Jamal Khashoggi, as well as other human rights abuses. Another reading of feminist care ethics, however, would point to the way these seemingly permissive care practices can—when joined with attentiveness to power and resistance—become especially potent at creating necessary change and limiting violence.

This potent combination brings to mind the image, popularized by feminist and nonviolent theorist-activist Barbara Deming in her essay “On Revolution and Equilibrium,” of the “two hands of nonviolence”: one hand reaching out to the humanity of the “other,” while the other hand is held up in resistance to their violence or injustice. As she describes it, “We can put more pressure on the antagonist for whom we show human concern,” when this concern is joined with “a stubborn interference with [their] actions.” What would a feminist foreign policy informed by this productive tension at the heart of feminist care ethics look like in the context of U.S./Saudi relations?

The first response to that question is: It would look like many different things. One element of feminist care ethics that might prove particularly frustrating to policymakers is that there is no clear script for the policies it informs: It is not about applying pre-established principles, and there is also often no clear way forward, only better or worse courses of action in response to particular contexts and many-layered power relations. Second, we could imagine a response that acknowledges the following: the global military and economic positioning of the United States in relation to Saudi Arabia (both the presence of U.S. military bases on Saudi soil and the military aid provided by the U.S. to Saudi Arabia, including for its war in Yemen) and the violent effects of these on regular Saudis and Yemenis; the U.S.’s implication in the global capitalist system that has shaped Saudi gender relations over the past century; and the U.S.’s own shortcomings when it comes to the human rights of many of those living within its borders. While “attentive listening” could include listening to and trying to understand the perspectives of Saudi officials, it would not end there nor would it take their claims at face value; instead, attentive also to power relations within Saudi Arabia, this approach to FFP would listen to Saudi activists themselves and what their strategies for empowerment are—and how external actions would (or would not) best enhance these. If these activists determine that a U.S. state visit would ultimately harm their efforts towards equal rights and empowerment, then the U.S.—listening attentively—might very well decide against such a visit. Possible disagreements among activists on this question, as well as repercussions of visiting or not visiting for the status of a ceasefire in Yemen, only underscore the uncertainty and imperfection of any course of action.

Yet, the potential for transformation is there. A U.S. cognizant of its own complicity in violence, militarism, and human rights abuses who therefore refuses to carry on “business as usual” with its arms sales and military bases; open to learning from others what they need to thrive and revising its policies accordingly; poised to resist the gender binaries that have been politically deployed to solidify its position at the top of the global hierarchy—this is a U.S. that would make it harder for authoritarian regimes to entrench their own power as a counterpoint to—and through vilification of—U.S. domination, while disregarding the rights and demands of their citizenry. In short, rather than enabling the repressive practices of governments, a FFP informed by a feminist ethic of care—the “two hands of nonviolence” translated into the register of state foreign policy—could instead deplete the political resources that enable these governments to function as such. Of course, no foreign policy will ever be perfect—and those deploying a FFP will make mistakes—but an ethos of humility and revisability and empathy will ensure that instead of doubling down on failed policies, policymakers can always change course, listening to the needs of those whose voices are usually not heard or heeded. [MW]

Alkhaled, S. (2021, April 19). In Saudi Arabia, women are turning to business as a form of “quiet activism” in their feminist movement. The Conversation. Retrieved August 17, 2022, from https://theconversation.com/in-saudi-arabia-women-are-turning-to-business-as-a-form-of-quiet-activism-in-their-feminist-movement-156816

Liloia, A. (2019, August 8). Saudi women are fighting for their freedom—and their hard-won victories are growing. The Conversation. Retrieved August 17, 2022, from https://theconversation.com/saudi-women-are-fighting-for-their-freedom-and-their-hard-won-victories-are-growing-121610