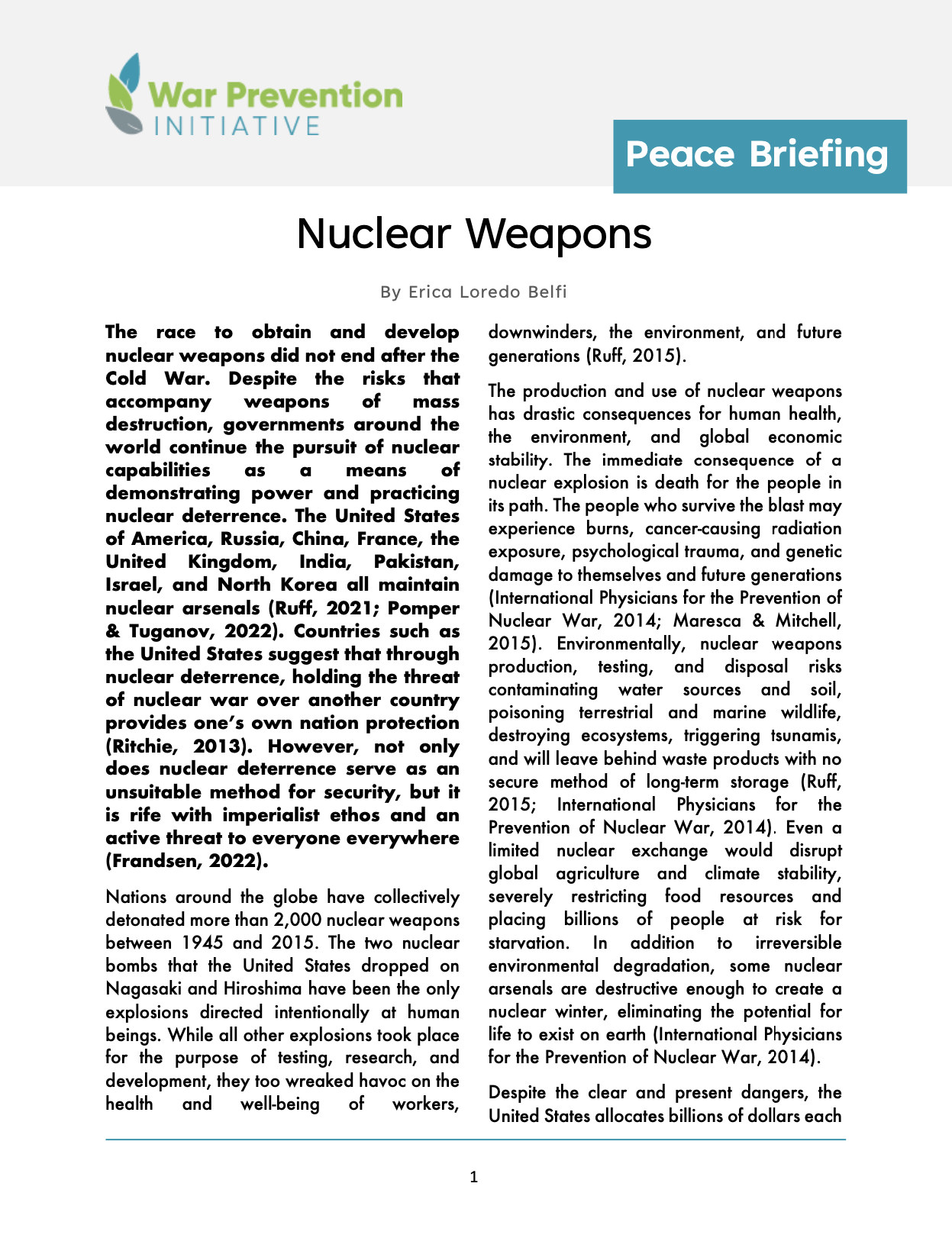 The race to obtain and develop nuclear weapons did not end after the Cold War. Despite the risks that accompany weapons of mass destruction, governments around the world continue the pursuit of nuclear capabilities as a means of demonstrating power and practicing nuclear deterrence. The United States of America, Russia, China, France, the United Kingdom, India, Pakistan, Israel, and North Korea all maintain nuclear arsenals (Ruff, 2021; Pomper & Tuganov, 2022). Countries such as the United States suggest that through nuclear deterrence, holding the threat of nuclear war over another country provides one’s own nation protection (Ritchie, 2013). However, not only does nuclear deterrence serve as an unsuitable method for security, but it is rife with imperialist ethos and an active threat to everyone everywhere (Frandsen, 2022).

Nations around the globe have collectively detonated more than 2,000 nuclear weapons between 1945 and 2015. The two nuclear bombs that the United States dropped on Nagasaki and Hiroshima have been the only explosions directed intentionally at human beings. While all other explosions took place for the purpose of testing, research, and development, they too wreaked havoc on the health and well-being of workers, downwinders, the environment, and future generations (Ruff, 2015).

The production and use of nuclear weapons has drastic consequences for human health, the environment, and global economic stability. The immediate consequence of a nuclear explosion is death for the people in its path. The people who survive the blast may experience burns, cancer-causing radiation exposure, psychological trauma, and genetic damage to themselves and future generations (International Physicians for the Prevention of Nuclear War, 2014; Maresca & Mitchell, 2015). Environmentally, nuclear weapons production, testing, and disposal risks contaminating water sources and soil, poisoning terrestrial and marine wildlife, destroying ecosystems, triggering tsunamis, and will leave behind waste products with no secure method of long-term storage (Ruff, 2015; International Physicians for the Prevention of Nuclear War, 2014). Even a limited nuclear exchange would disrupt global agriculture and climate stability, severely restricting food resources and placing billions of people at risk for starvation. In addition to irreversible environmental degradation, some nuclear arsenals are destructive enough to create a nuclear winter, eliminating the potential for life to exist on earth (International Physicians for the Prevention of Nuclear War, 2014).

Despite the clear and present dangers, the United States allocates billions of dollars each year for the maintenance and modernization of its nuclear weapons. The funds diverted to advancing nuclear weapons technology, cleaning up nuclear waste, and continuing to manage the nuclear stockpile is money that is not being used for essential services such as education, health care, and infrastructure (International Campaign to Abolish Nuclear Weapons, 2012; State of the Hanford Site, 2014). In preparing for a nuclear war, governments neglect the immediate needs of their people for basic welfare. Furthermore, people in nuclear frontline communities, communities that surround the regions where governments “extract[], produc[e], test[], clean-up, and stor[e] nuclear materials and weapons,” face the worst effects of nuclear management through exposure to harmful waste products, radiation, and environmental degradation. Most often, the people in frontline communities are Black, Indigenous, people of color, or low income (Union of Concerned Scientists, n.d.). Thus, by continuing to maintain and expand nuclear arsenals, officials endanger already vulnerable and marginalized communities.

Between 1946 and 1958, the United States conducted an atmospheric nuclear weapons test program on the Marshall Islands, forcing its Indigenous island community to vacate. The U.S. government conducted 67 atmospheric tests, creating nuclear fallout conditions and vaporizing entire islands. Over the course of the program, the islands underwent the equivalent of 1.6 Hiroshima bombs every day for twelve years.  When approached about invoking U.S. eminent domain powers to seize the Pacific Islands from its inhabitants to use for nuclear testing, former U.S. Secretary of State Henry Kissinger replied “There are only 90,000 of them out there. Who gives a damn?” (Ruff, 2015). Despite the drastic damage to their land and livelihoods, the Marshallese never received compensation for the destruction.

The pursuit for nuclear weapons persists regardless of their gruesome history. Why? Forces such as the hyper-masculine militarized state, white supremacy, Western imperialism, and global inequality all contribute to nuclear weapons’ lasting presence.

The pursuit for nuclear weapons persists regardless of their gruesome history. Why? Forces such as the hyper-masculine militarized state, white supremacy, Western imperialism, and global inequality all contribute to nuclear weapons’ lasting presence. The assumption that national security requires domination, shows of physical force, and aggressive weaponry is part of the U.S. military’s roots in a hyper-masculine ideology that reinforces a global hierarchy (Das, 2014). While nations have attempted to rein in the production of nuclear weapons through global non-proliferation treaties, countries with nuclear capabilities routinely refuse to sign on and relinquish their place at the top of the power hierarchy. This trend results in a nuclear apartheid, separating the globe into two categories: countries that are seemingly responsible and stable enough to control nuclear weapons and maintain global order, and countries that are not (Das, 2014). For less stable countries, nuclear weapons can also serve as a means to guarantee national sovereignty and survival in the face of outside aggression (Anderson, 2017).

Despite their persistent presence, the number of nuclear weapons in existence is declining. Around thirty years ago there were an estimated 70,300 nuclear weapons globally. Now, there are approximately 12,705 – an 80% decrease (Global Zero, n.d.). While the numbers are still high, eliminating nuclear weapons is not an impossible task. Doing so will first require that we devalue nuclear weapons and urge countries to voluntarily surrender their arsenals. Without alternative peace agreements, nuclear weapons are perceived to be essential to national security and thus indispensable. In addition to being a destructive and powerful technology, they serve as a symbol for prestige and status on the international political stage (Ritchie, 2013). By acknowledging the human, environmental, and economic costs of nuclear weapons as well as revealing the ways they negatively contribute to our security, we can more accurately convey the danger they pose and eliminate nuclear weapons as an option in foreign policy.

Moving forward without nuclear weapons will require government officials to make decisions not only through the lens of national security and interest, but also humanitarianism. Countries with nuclear capabilities must agree and actively enforce international treaties prohibiting nuclear weapons proliferation (Ruff, 2015). Furthermore, national governments must publicly “acknowledge and support the communities who were harmed by previous nuclear weapons testing a use,” including, but not limited to, financial compensation, relocation services, waste cleanup, and continued support for future generations affected by radiation exposure (FCNL, n.d.). In order to address the harms inflicted on survivors – including the Marshallese, downwinders, Hibakushas, and many more – we must center those communities most affected by nuclear development and listen to their experiences of its consequences (Ruff, 2015).

No amount of nuclear weaponry can provide security. Eliminating weapons of mass destruction is not an impossible task, but a necessary one. Until we actively work towards this goal, nuclear weapons-holding nations continue the tradition of sacrificing human and planetary well-being for the power of destruction.

Pomper, M., & Tuganov, V. (2022, April 1). What countries have nuclear weapons, and where are they?https://theconversation.com/what-countries-have-nuclear-weapons-and-where-are-they-180382