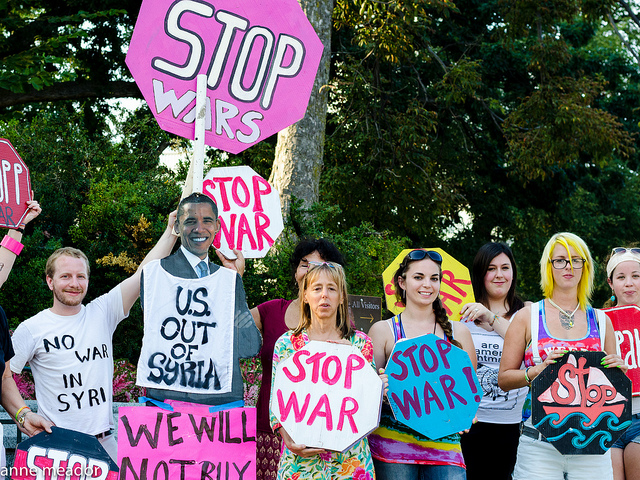 The red line was crossed; let’s fire a shot across the bow. It sounds so easy, so clean, so surgical. Splash! A harmless shot landing in the water to make the enemy compliant. Since the American public – and for that matter the entire world – is rightfully doubtful of yet another U.S. military adventure, the administration is trying to play down what indeed are the preparations for going to war with another country.

The graphic footage of a chemical attack on a suburb of Damascus on August 11 shocked me just as much as the rest of the world. Few will argue that this attack in fact was the indiscriminate climax of violence in an already escalating violent conflict between the Syrian regime and the many scattered opposition forces. Those who suffer most once again are the civilians.
That’s what modern warfare looks like. In “The People on War Report”, the International Committee of the Red Cross states that it is estimated that 10 civilians die for every soldier killed in battle. In light of this reality, surgical warfare or shot across the bow is an illusion. We will rather see more disturbing graphical footage like in the aftermath of the chemical attack on August 11. Nobel Peace Laureate Mairead Maguire wrote in her call to prevent the U.S. from going to war with Syria: “Every act has its consequences and every violent act, like the proposed U.S. military intervention, has its violent consequences which will cause the death of further Syrian civilians and result in many more refugees.”

Now for the sake of argument, let’s compare perspectives in favor and against a military intervention. Informed by what they know, what they think they know and what they want to know, the U.S. administration is advocating for a military response to punish Syrian President al-Assad. Like in previous wars, this distorted knowledge should be fed to the public through the mainstream media by relying on the usual “experts” and the idea that all diplomatic efforts have been exhausted. Guess what, it’s not working. The American and global public know better. They know better because real experts with real credibility have been dampening the sound of the war drums with their proposals of nonviolent, more effective alternatives.

On the other side we have an outpouring of intelligent, thought-through, pragmatic, analytical pieces and proposals that all were far superior to the ill-advised shot across the bow option. One might think the opposition to war comes from the usual suspects, which for the sake of simplicity I will call the “Make love not war” folks. Sure, and thank goodness they will always be there. But let’s look at a snapshot of other groups. United Nations General Secretary Ban Ki-moon asserts that possible strikes could lead to tragic consequences. After a real debate, the British Parliament voted against military intervention in Syria. The European Union urges for the continuation of diplomatic efforts. The Pope stated that military action in Syria would be a futile pursuit. The Elders, an independent group of global leaders including Nobel Peace Laureates Nelson Mandela, Desmund Tutu, Kofi Annan, Jimmy Carter, and Martti Ahtissari stated that there is no military solution to the conflict and urge for continued efforts to bring about a political solution. In a statement by The Nobel Women’s Initiative, the laureates—Jody Williams (US), Shirin Ebadi (Iran), Tawakkol Karman (Yemen), Mairead Maguire (Ireland), Leymah Gbowee (Liberia) and Rigoberta Menchú Tum (Guatemala)—are asking the UN Security Council to refer the case of chemical weapons being used in Syria to the International Criminal Court (ICC). In a letter to President Obama, Argentinian Nobel Peace Laureate Adolfo Perez Esquivel urges the White House to desist from any military plan, pointing to the danger for international stability. Those combined voices cover a pretty good part of the list of living Nobel Peace Laureates. You’d think they know what they are talking about.

Another group is scientists with an outstanding track record of scientific inquiry into matters of war and peace, publicly assessing options to deal with the crisis. David Cortright and George Lopez from the University of Notre Dame, who are well-known for their proposal of an alternative to the 2003 invasion of Iraq, propose multilateral strategies with intensified diplomatic efforts. Stephen Zunes, one of the country’s leading scholars of U.S. Middle East Policy at the University of San Francisco argues against going to war with Syria based on the illegality of an attack, the possible escalation of violence, the broad international opposition to name only a few points. Andrew Bacevich, a retired Army officer and expert on security studies and American foreign policy at Boston University reminds us of the many military enterprises and raises the point “if this militarized approach to the region maybe is a fool’s errand.” Fawaz Gerges, a professor of international relations at the London School of Economics and Political Science promotes the establishment of an international coalition through the United Nations Security Council instead of taking military action.

The nonviolent alternatives are too many to count, but the proposed options evolve around the major elements of continued support for the UN investigation on the use of chemical weapons, prosecuting responsible parties through the International Criminal Court (ICC), invoking targeted economic sanctions through the UN Security Council, supporting local nonviolent campaigns, pursuing diplomacy including all Syrian and international stakeholders, and initiating a peace conference including all stakeholders. These and similar proposals are considered far more effective and less costly than any kind of military approach.

I am convinced that the experts and the broad public support opened the political space the President needs to stick to his red line. There are forceful responses; they just don’t include Tomahawk missiles and other death-bringing weaponry. In contrast to the limitations and undesirable consequences of a military intervention, the nonviolent alternatives are a force more powerful. President Obama can seize the unique opportunity to use nonviolent means as preferred forceful responses and set a new tone for global leadership and collaboration. Tapping into the vast set of alternatives to killing also would add substance to his Nobel Peace Prize awarded for “extraordinary efforts to strengthen international diplomacy.”

This commentary was published through PeaceVoice and appeared – among others – in PeaceNews.org http://peacenews.org/2013/09/syrian-red-line-an-opportunity-to-set-new-tone-of-global-leadership-and-collaboration-peacevoice/