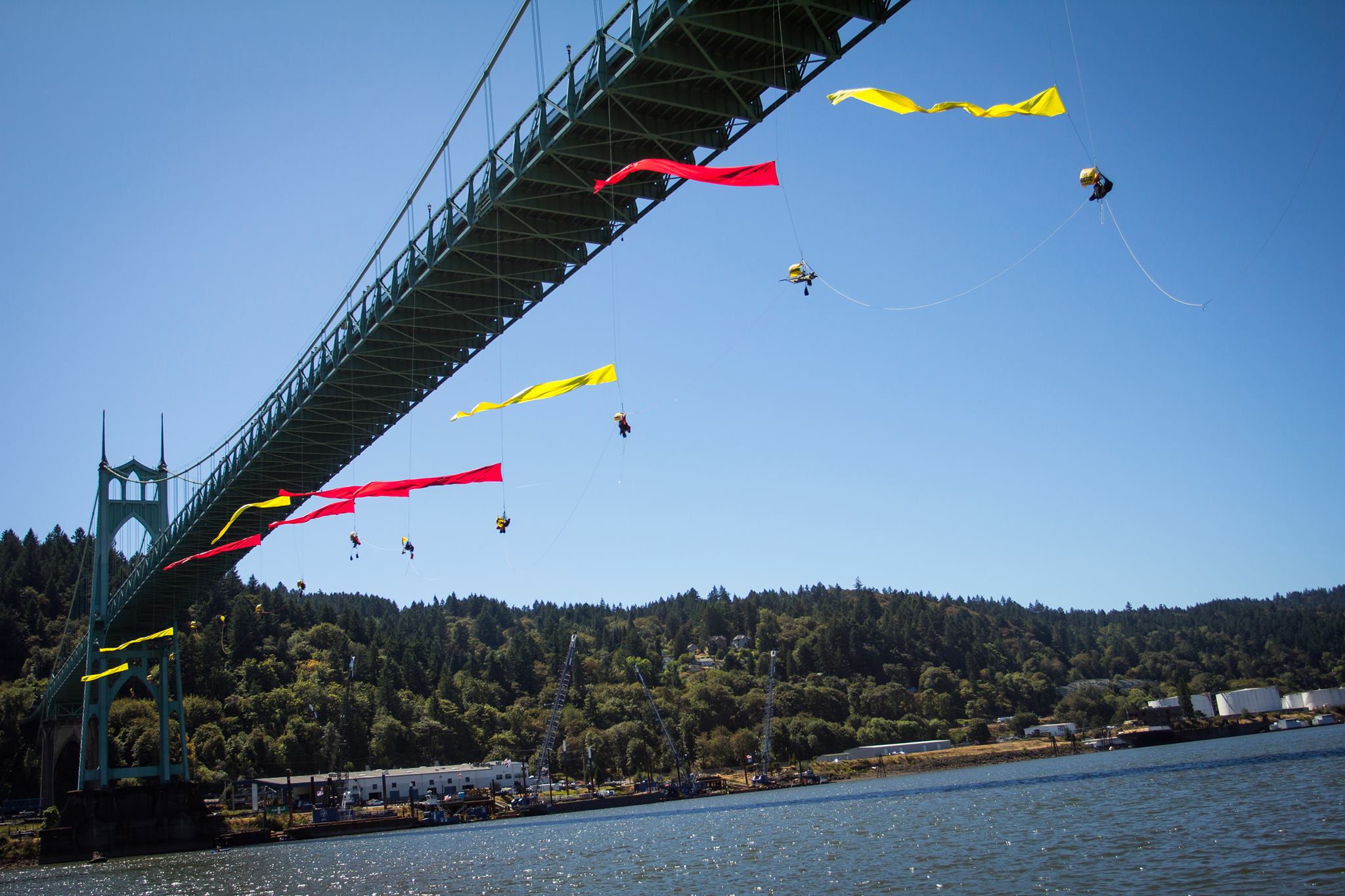 I don’t know any of the 13 activists who lowered themselves from the St. John ’s Bridge in Portland, Oregon, nor any of the dozens of kayakers paddling in the Willamette River below them, but they succeeded in a temporary blockade of the Shell-leased Arctic-bound icebreaker MSV Fennica. I know that the activists participated in our democracy—they were nonviolent and far more civil than many members of Congress.

The ship was in Portland for repairs of damage to the hull, which ironically occurred when it was scheduled to leave for the Arctic as part of the safety conditions Royal Dutch Shell Oil needed to fulfill for federal approval to drill for oil after a series of accidents in 2013.

The fragile ecosystem, accelerated climate change, and the missing infrastructure and technology to mitigate disasters in the Arctic are the major arguments against drilling. Scientists in Nature Magazine tell us that “all Arctic resources should be classified as unburnable”.  Oregon Senator Jeff Merkley considered the Fennica’s departure from Portland a “make-or-break moment for our environment and our future climate.” One would assume that such arguments are high on President Obama’s environmental and climate priorities. I suspect President Obama does not need to be reminded, but he might need the political space to act.

Public activist campaigns are crucial elements to open media, social and political space for climate protection and to the challenge of corporate-driven extraction of resources. Even though many agree with the causes activists support, they tend to dismiss them for a variety of reasons – they’re naïve, breaking the law, they’re hypocrites, they curtail the rights of others, or it’s none of their business. Over the last years I have studied the lives of nonviolent activists extensively. I can attest that such critique is far off. We should look at the activists as individuals who might be very ordinary people whose extraordinary actions contribute to positive change based on a vision of a better future for everyone.

On the group level, social movements and specific activist campaigns have proven to be successful. One might look at nuclear disarmament, framed as a result of cooperation between former U.S. President Ronald Reagan and former General Secretary of the Communist party of the Soviet Union Mikhail Gorbachev. But historian Lawrence Wittner documented that cooperation was both driven and made possible by the efforts of worldwide activist campaigns.

More recently, President Obama vetoed a bill authorizing the controversial Keystone XL pipeline and there is speculation that he will reject the Keystone XL pipeline in the next month. If that happens, the primary reason might have been the sustained effort by modern grassroots environmental movements which have kept the project and its consequences in the public imagination long enough to open the political space for Obama.

On the more personal level, individuals who adopt an activist identity tend to develop worldviews with concerns that go beyond themselves. In my year-long study of nonviolent activists some common themes were: a sense of community; perspectives beyond the local; the interconnection of personal, social and environmental issues; a long-term commitment; and a positive sense of self. These factors become important when we examine the larger struggle they are involved in. Conflict transformation scholar Tom Hastings described the #ShellNo protest in Portland as follows: “So many Portlanders turned out over two days. Yes, they brought down the airborne activists and cleared the kayakivists out of the way and bullied their oil rig through. But they lost, big time, in the view of Portlanders. I saw entire families just out to support for hours on end. So many kids! And spirits were so good, so sweet, so positive. Big oil lost; they just don’t know it yet.”

Of course there are those of us who say that activists and their supporters are hypocrites. The ropes they used to hang bellow the bridges, their puffy coats to keep warm, their kayaks, their life vests, etc. all are petroleum-based products. Should those of us who drive cars and have many of the privileges of Western societies be excluded from challenging dangerous oil drilling? If purity is required, virtually no one will ever qualify and we should thus never hear disagreement from our citizenry to corporate or governmental policy, i.e., the end of democracy.

While the protest in Portland got worldwide attention, the reality of our news cycle is that another mass shooting or announcement of a new presidential candidate will take over the headlines momentarily. At the same time it is clear that these acts of nonviolent civil disobedience gave a boost to the sustained effort of preventing Shell and any other corporation from drilling for oil in the Arctic. The activists very well knew that they ultimately would not prevent the ship from passing. The stated goal of this action by Greenpeace was to get President Obama to reject Arctic drilling. Just like the ship when it first turned around, the Obama administration now has an opportunity to change its course. Thanks to the activists, any attempts at Arctic drilling from now on will be under far more scrutiny and political leaders now have more space to act.

Originally sent out through PeaceVoice