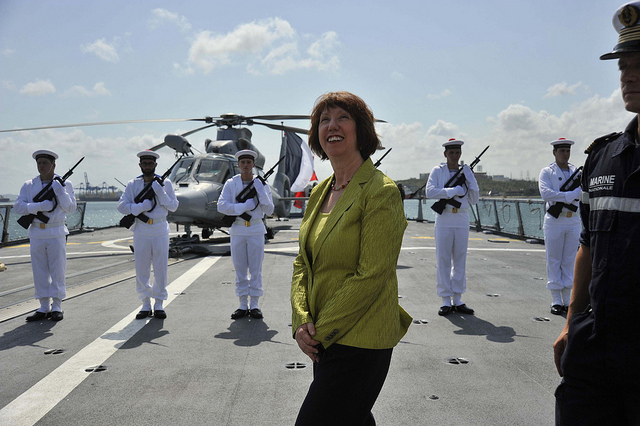 “The War to End all Wars” never achieved what H.G. Wells implied with this term. On the contrary, World War I not only resulted in the death of more than 16 million humans, it also resulted in a victor’s peace directly setting the stage for World War 2 where an estimated 60 to 100 million people died. I like to believe that no World War is on the horizon, but I was quite surprised to read the headline of a Wall Street Journal opinion piece “To Secure Peace, Be Ready for Battle. The surprise not so much was the title itself. This language—promoting ‘peace’ by amassing more military—has been all-too-familiar and all-too-common in the twenty-first century perpetual ineffective and counterproductive war on terror and other misguided relics like humanly insane nuclear deterrence or the offensive, war-waging North Atlantic Treaty Organization (NATO).

My surprise with this opinion piece came after the headline when it I realized it was not one of our usual media “experts” whose insights supporting the military status quo are abundantly available in major corporate media. The article is authored by Catherine Ashton, high representative of the European Union for foreign affairs and security policy and vice president of the European Commission. Wait, didn’t the European Union receive the 2012 Nobel Peace Prize? And was it not the will of Alfred Nobel to recognize “the person who shall have done most or the best work for fraternity between nations, the abolition or reduction of standing armies and for the holding and promotion of peace congresses”? The answer to both questions is yes. Previous Nobel Peace Laureates Desmond Tutu, Adolfo Perez Esquivel and Mairead Maguire co-authored a letter stating that the EU was “clearly not one of the ‘champions of peace’ Alfred Nobel had in mind,” adding that the EU condones “security based on military force and waging wars rather than insisting on the need for an alternative approach.” The 2009 Nobel Peace Prize to Barack Obama also caused considerable controversy as he admitted himself. In his acceptance speech Obama noted: “So yes, the instruments of war do have a role to play in preserving the peace.” No Mr. President, and no Ms. Ashton. This is not what Alfred Nobel had in mind with when he wrote his will.

The entire article by Ashton is so misguided that it is hard to focus on one part. Should we talk about the immorality of Western global power projection, the ineffectiveness of military versus nonviolent alternatives, the myth of the “defense” sector as a job creator or corporate interests in building “defense” machinery? Apparently it would have been nice from Ashton’s European Union perspective to have more of their own air tankers refuel the fighter jets while bombing the country of Libya to get rid of a dictator. It is troubling that Ms. Ashton seriously is using the Libyan example as a success story. All alarm bells should be ringing by now.

We need to eradicate this skewed defense and security paradigm built upon the belief that peace and security should be pursued through military force. Security of the European Union unfortunately is defined in relation to military power and its global projection – does this sound familiar? This view is created and maintained by those who benefit from legitimizing direct or structural violence – violence which kills or social structures which prevent people from fulfilling their basic needs.

Author and peace studies professor Jack Nelson-Pallmeyer helps us move toward a more authentic concept of security. He distinguishes between protection of interests and authentic security. The first one is supported by offensive militarism. Nelson-Pallmeyer writes: “Militarism is not defense. Defending interests isn’t the same thing as defending legitimate security needs.” The second one based on the idea that leaders “take steps to keep families, homes, neighborhoods, and nation safe and secure.” Which one would you chose?

Or let us look at human security as another concept which outweighs Ashton’s EU proposal. Jody Williams, who received the 1997 Nobel Peace Prize for her work to ban landmines believes that peace is defined by human and not national security and that is must be achieved through sustainable development, environmental justice and meeting people’s basic needs (2011 Ted Talk). Mairead Maguire, who received the Nobel Peace Prize in 1976 for her to action to help end the violence in Northern Ireland continues to speak out against the institutions of militarism and war. Both those extraordinary women know violent conflict and its consequences.

A Nobel Peace Prize is not necessarily a Nobel Peace Prize. Jody Williams, Mairead Maguire, Desmond Tutu and Adolfo Perez Esquivel have the moral and intellectual authority to inform us what about the necessary steps toward peace and security. They certainly do not involve instruments of war as President Obama suggests or preparing for battles as Catherine Ashton suggests.