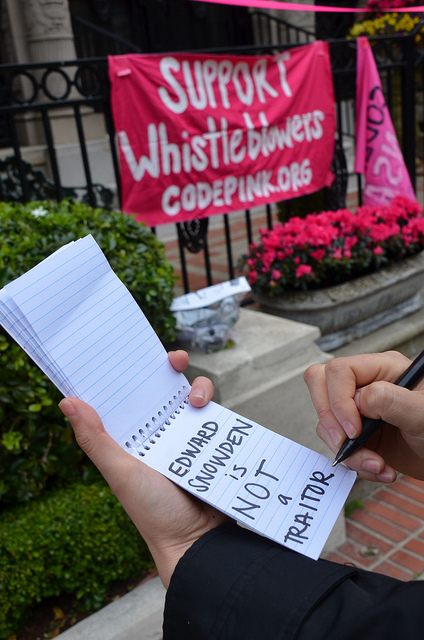 A little leak can be quickly fixed by stuffing it. Large leaks, however, often require more structural repairs or completely different solutions. Bradley Manning’s and just days ago Edward Snowden’s leaking of classified information demonstrates just how big our structural repairs need to be. What they exposed are further indicators of the faulty framework of the national security debate.

In other words, a poorly designed security construct is collapsing. We discuss the acts of those individuals on a sliding scale from “nominate them for the Nobel Peace Prize” to “try them for treason” – I opt for the first. Distracted by character debate, however, we are missing opportunities to engage in more meaningful discussions about the faulty structures they exposed.

We are operating out of the perpetual fear that evil is out there to eradicate the United States of America. The government’s guiding foreign policy principle is to keep the American people safe (http://www.whitehouse.gov/issues/foreign-policy), and in doing so the military and intelligence agencies are overstepping legal and ethical boundaries in an outdated understanding of security. While very few would argue against the need of security – in fact it is a shared basic human need for everyone – we are constantly missing opportunities as a nation to re-define security.

Security, particularly national security, unfortunately is defined in relation to military power and its global projection. A fact worth repeating is that we are spending as much as the world’s next 15 countries on our defense (Stockholm International Peace Research Institute). It is too much and it does not serve our national defense. Our country is not under attack. There is no clash of civilizations or a battle between American freedom versus the perceived darkness of an Islamist world.

For the sake of having the security discussion let us look at the war on terror and the perpetual terrorist threats which led us into two real wars and are driving the current security conversations. The most recent leak of confidential governmental information was that of Edward Snowden, a computer analyst working for the private government contractor Booz Allen Hamilton. He revealed the existence of PRISM, a clandestine electronic American national security surveillance program designed to identify terrorists. More than that, PRISM appears to be highly invasive of the privacy of all citizens in an unprecedented collection of data, the full extent yet to be revealed. Instead of resorting to science fiction surveillance tactics out of George Orwell’s novel 1984 through PRISM and “pre-crime” enforcements tactics out of Steven Spielberg’s film Minority Report through drone strikes, we have an opportunity to resort to real science in our responses to terrorism. The bottom line is that we now understand patterns and dynamics of violence and ways of constructive conflict transformation. And quite frankly, the strategies and tactics employed by our government are not constructive pathways toward eliminating terrorism.

Scientists studying the causes and consequences of war offer multiple nonviolent responses to terrorism which are part of an evolving global system of peace. Effective nonviolence, international adjudication, conflict resolution, peace education, indigenous rights, smart sanctions, non-governmental organizations and effective humanitarian work, peaceful interpretation of religious scriptures or human rights are just a few real trends accompanied by proven approaches to move them forward. John Paul Lederach, a pioneer in the peace and conflict studies field who teaches at the University of Notre Dame, suggests that nonviolent responses to terrorism should be based on engagement rather than isolation – particularly of civil society. Those strategies allow for solutions over the mid-term and long-term which are more likely to address the root causes of the grievances. Imagine the new horizons that would open up.

A talented computer analyst like Edward Snowden would not need to fear for his future and life for acting out of his conscience and could be put to work on creating sophisticated early warning violence prevention networks. Our aeronautical engineers could design, manufacture and program drones for tornado warnings, disaster relief or atmospheric research. Then we don’t need to have discussions about the perpetual war on terror, drone strikes, Guantanamo Bay, or the manufactured fear of an established Islamist state. Then we are indeed strengthening an evolving global peace system, which is not based on utopian thinking but based on numerous trends of constructive conflict transformation, social change and global collaboration.

As to security, we can re-define security as a more positive role for the United States in the world rather than constantly preparing for war and going to war in the name of freedom. That is not only patriotic and demonstrates love for our country, it addresses the human need for security of all.