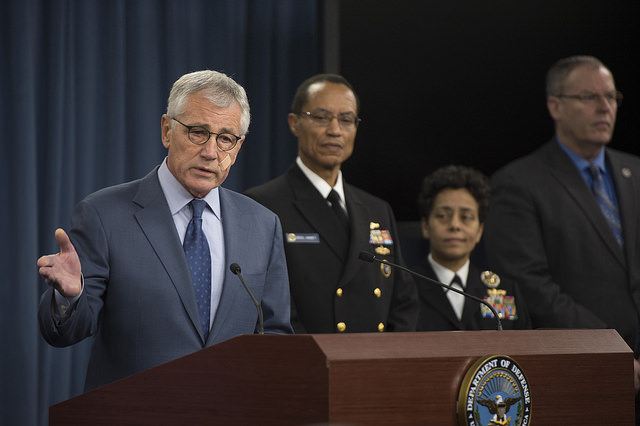 Did you notice? Secretary of Defense Chuck Hagel just announced plans to massively “upgrade” the US nuclear arsenal. It might have been swallowed by other breaking and ongoing news: ISIS and another beheading, Ebola, Ferguson, or the historic comet landing of Philae – at least one positive story. In addition to local news, stories in my own community of Hood River, Oregon include the transport of coal and construction of coal terminals, blast zone determination for oil trains, or the legacy of the Hanford nuclear production complex, which was part of the Manhattan Project.

Those unique or ongoing events certainly have their place in the news cycle and matter to us at different levels. Does that mean that we should numbly accept new plans by our government to revitalize systems which without doubt are the greatest threat to human survival? Did we forget that our President told the world in Prague in 2009 that America is committed to seek peace and security by creating a world without nuclear weapons, and for that announced intention received a Nobel Peace Prize?

The concerns outlined by Secretary Hagel could have provided an excellent opportunity to significantly implement the needed steps away from nuclear weapons. Cheating scandals on qualification tests or misconduct by top officers overseeing key nuclear programs certainly are worrisome. Even more worrisome is the fact that nuclear weapons still exist and are not considered an abnormality.

The more troubling aspect of Hagel’s announcement is the broader nuclear modernization program. Making sure the so-called triad of strategic deliver systems grows, the Pentagon can plan for plenty of new missile submarines, new bombers and new and refurbished land-based missiles. The Monterey Institute of International Studies sums up their well-documented report: “Over the next thirty years, the United States plans to spend approximately $1 trillion maintaining the current arsenal, buying replacement systems, and upgrading existing nuclear bombs and warheads.”

Even the most doubtful among us will see the contradiction between the commitment of seeking a world without nuclear weapons and “revamping the nuclear enterprise” as Hagel noted in his keynote speech at the Reagan National Defense Forum last week.

It appears that the absence of the Cold War and the soothing rhetoric about a world without nuclear weapons keeps us complacent–or can anyone imagine one million people demonstrating against nuclear weapons as they did in New York City in 1982? That same year was the largest exercise in direct democracy (voting on an issue rather than representatives to decide ‘our’ view) when voters in referenda in about half the states decided overwhelmingly to call for a freeze on research, development, production and deployment of nuclear weapons. I think we the people should make ourselves heard again. Conflict transformation experts help us articulate many, some of them are:

First, nuclear deterrence is a myth and ought to be rejected by all people and governments. In the Santa Barbara Declaration by the Nuclear Age Peace Foundation the major problems outlined with nuclear deterrence are: (1) its power to protect is a dangerous fabrication; (2) the assumption of rational leaders; (3) the threatening of mass murder is illegal and criminal; (4) it is immoral; (5) it diverts badly needed human and economic resources; (6) its ineffectiveness against non-state extremists; (7) its vulnerability to cyber-attacks, sabotage and error; and (8) setting an example to pursue nuclear weapons as deterrence.

Third, don’t wait for conditions to be ripe. There is statistical certainty that a nuclear weapon will be used at some point. The only way to make sure it does not happen is to eliminate all.

Fourth, encourage compliance with all international treaties and create new ones that will ban and eliminate all nuclear weapons worldwide. We are at a time in history where a Global Peace System created conditions for global collaboration through international laws and treaties. It is time for the United States to meaningfully participate in this system.

Fifth, move our government toward unilateral disarmament. Without a nuclear arsenal we are not making anyone less secure. What if the United States would take the lead in a global “disarmament race”? After decades of international military interventionism the United States might become a loved and respected country again.

Sixth, recognize the role of nuclear weapons in the chain of global violence ranging from hand guns on the streets of Chicago to catastrophic environmental and humanitarian consequences of nuclear weapons use. Violence and the threat of violence on all levels perpetuates violence.

No Russian take-over of the Ukraine, Chinese territorial claims, or even Pakistani expansion of nuclear arsenal makes it any more logical to revitalize our nuclear arsenals. We can reject the myth of nuclear deterrence and we can help the government shift the spending priorities to healthcare, education, infrastructure, the environment, renewable energy, low income housing and many more important areas. Currently our public conscience is lacking urgency with regard to nuclear weapons. We owe it to ourselves and our children to activate this urgency and make the elimination of nuclear weapons a step toward a world beyond war.