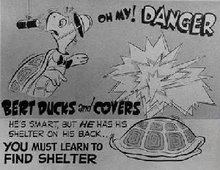 In 1951 the US government’s Civil Defense Branch produced the film Duck and Cover. Bert the Turtle reached millions of school children and adults as part of a national campaign to prepare the population in case of a nuclear attack. Even at that time the usefulness of the proposed duck-and-cover maneuver in the face of the utter annihilation arising from a nuclear blast was questioned. Today’s advanced, larger, and far more numerous nuclear weapons have made the chance of surviving a nuclear attack with the ‘duck and cover’ tactic as hallucinatory as chatting with Bert the Turtle. The threat posed by nuclear weapons is still grave and the only true security for our society lies in their elimination worldwide.

Aside from the safety threat to all humans, the fact that we as a nation spend $100,000,000 every day for researching, developing, procuring, testing, operating, maintaining, and upgrading these weapons of mass destruction is fiscally unconscionable. Peace scholar Marc Pilisuk goes further by stating that, “more resources are now committed to the development and testing of nuclear weapons than were spent (using constant dollar comparisons) at the height of the Cold War.”
Despite the “commitment” to nuclear abolition delivered by our political leaders (even including a Nobel Peace Prize), the spending on nuclear weapons in the United States is on the rise. Harvard psychologist Steven Pinker, who argues that we are living in the most peaceful era in our species’ existence, warns us that “as praiseworthy as the various nuclear arms reduction treaties have been, they make little difference to global security as long as thousands of weapons remain in existence and the technology to make new ones is not forgotten.” One nuclear weapon alone in the hands of friend or foe is one too many for humans to be exposed to.
Continued investment in weaponry that can wipe out humanity is not only a disservice to us; it is a gun to the head of future generations. The International Campaign to Abolish Nuclear Weapons (ICAN) helps us take real steps toward ridding the world of nuclear weapons. Recently ICAN published the thoroughly researched report “Don’t Bank on the Bomb.” It offers an opportunity for the corporate world “to advance the goal of nuclear abolition” by ‘divestment.’ Financial institutions and individual investors are advised to exclude nuclear weapons companies from their investment portfolios. Consumers are guided to boycott companies that participate in this industry. The ICAN report lists 169 public American companies that produce or profit from the nuclear arsenal.
Global financial institutions play a key role in financing nuclear weapons companies through share issues, shareholdings, bond issues, bond holdings and bank loans (322 institutions worldwide, 169 in the United States). The likelihood that our own bank is involved is high. Why don’t we help the financial institutions divest from the illegitimate nuclear weapons industry? Why don’t we make sure that our financial service provider is not involved in ‘banking the bomb’? This report can help us know and thus help us act.
We all know that nuclear weapons are inhumane, illegal, cause environmental devastation and are a threat to peace. In addition, the financial institutions face risk to their reputation that can go as far as consumer boycott. Rather than pursuing unsafe investments, financial institutions can make a positive contribution, increase employee satisfaction and identification, and develop an improved corporate image.
As to our role as investors and account holders, ICAN offers constructive suggestions as to how we can take action as individuals. First and foremost, writing to and meeting with representatives of financial institutions allows us to exert positive pressure – the personal aspect underlies our shared humanity. Financial institutions might not be aware of their clients’ concerns about the investment in an industry that profits from the production of inhumane weapons, in frequent direct violation of international laws and treaties. Some of us are more comfortable meeting representatives or writing letters or petitions, while others may want to engage in protests, use their power as shareholders, or engage the media. It is well within our reach to make our own unique contributions—however huge or humble—to a universally shared goal of a nuclear weapons-free world. Nuclear annihilation is bad for business and for children.
Citing World Bank data, the ICAN report showed that if only half of the money spent on the development of nuclear weapons would be freed to spend on alleviating dire human need, the United Nations Millennium Development Goals would be met by the target date of 2015. Accepting the status quo is supporting a system that in its worst manifestation can lead to mutually assured human destruction. If we make conscious individual and collective decisions as account holders and investors we can be part of these efforts to eradicate extreme poverty and hunger, achieve universal primary education, promote general equality and women’s empowerment, reduce child mortality, improve maternal health, combat HIV/AIDS and ensure environmental sustainability. I choose the latter. Sorry, Bert the Turtle, your plan does not work. We can no longer Duck our ethical responsibilities under Cover of any threat greater than the dangers presented by our own weapons and posture.