PORTLAND, OR – The War Prevention Initiative (WPI) condemns the vicious and racist attacks by U.S. President Donald J. Trump on U.S. Congresswomen Alexandria Ocasio-Cortez, D-N.Y., Ilhan Omar, D-Minn., Ayanna Pressley, D-Mass., and Rashida Tlaib, D-Mich. Instead of apologizing or retracting those statements, the President nourished the comments, leading to a chilling “send her back” chant at a campaign rally on July 17, 2019. This kind of violent hate speech gives rise to conditions for violence at home and war abroad.

WPI Executive Director Patrick Hiller stated: “If it were a little fringe group chanting those horrible things, I’d consider it disgusting and shameful. Seeing this at a rally held by the President of the United States, where he cues up the audience’s response and boasts in the hate against a member of Congress, or for that matter anyone, reminds me of everything I learned while growing up in Germany. Germans take ‘never again’ quite seriously, and throughout my educational journey I learned how subtle discriminatory acts turned into socially accepted and officially sanctioned discrimination against many ‘others’. Rallies whipping up hate were an important part of that context, and we very well know the outcome. Moreover, here in the U.S. I’ve never been told to go back home, despite having been born and raised in Germany. I am a white man, and it is one of the many privileges I receive living in Trump’s America. That makes it even more important for me to actively confront racism and other forms of discrimination. It should not be left to those who are the targets of such attacks to address them alone.”

The President has created a context where violence against people of color, particularly women of color, who voice dissent is considered acceptable in civil discourse. It is never acceptable. The normalizing of hate and fear based on a white supremacist ideology is dangerous because it is linked to the spread of violence both domestically and internationally. Data from the Global Terrorism Database show a steady rise in attacks by white supremacists world-wide. The data also show growing connections between white supremacist groups across North America, Europe, Australia, and New Zealand.[1]

The targets of the President’s attacks Reps. Alexandria Ocasio-Cortez, D-N.Y., Ilhan Omar, D-Minn., Ayanna Pressley, D-Mass., and Rashida Tlaib, D-Mich., deserve to serve as duly elected members of the U.S. Congress without becoming the target of white supremacist violence. At the War Prevention Initiative, we will continue working for a more just and peaceful world, and advocate against hatred and violence.

War Prevention Initiative: “Rising Tensions Between the U.S. and Iran Must Not Lead to War”

War Prevention Initiative: “Rising Tensions Between the U.S. and Iran Must Not Lead to War”

PORTLAND, OR – The June 13, 2019 suspected attacks on tankers in the Persian Gulf were promptly followed by Secretary of State Pompeo’s declaration that the U.S. government is holding Iran responsible for the attacks. Iranian Foreign Minister Zarif called the incidents suspicious and urged for regional dialog to reduce the tensions.

The War Prevention Initiative urges all parties involved to exercise restraint and to exclusively pursue diplomatic solutions amid the rising tensions. The current trajectory toward a war of choice is dangerous and one that both National Security Advisor John Bolton and Secretary of State Pompeo are pursuing. The tanker incidents must not lead to war. The consequences would be disastrous in terms of casualties on all sides, further destabilization of the Middle East, the increased risk of nuclear proliferation and war, and the waste of trillions of dollars. First, war declared by the administration without congressional approval is unconstitutional. Second, diplomatic solutions should be pursued at all costs. Long-term, often messy diplomacy—even if it comes with setbacks—is always preferable to war, which in this case would be unwinnable and catastrophic.

War Prevention Initiative Executive Director Patrick Hiller stated: “These escalated tensions all take place within the context of the U.S. unilaterally withdrawing from the Iran Nuclear Deal. On my recent trip to Iran, I learned that the Iranian people expected to see improvements in their lives from the deal. They are well aware of their own government’s problematic behavior, but the last thing they want is the help of the U.S. to ‘get back their freedom’. One thing that the highly educated Iranian people know for sure is that Donald Trump, Mike Pompeo, and John Bolton don’t care about their freedom or suffering.” Outside pressure strengthens hardliners in Iran and leads to Iranians to rally around the flag. Without external pressure, Iranians can work toward social change on their own time and on their own terms.

“As conflict analysts, we are constantly mapping and tracking conflict trajectories. In what we call the conflict escalation and de-escalation curve, we are just short of war, and some of the highest government officials have made up their mind about it” says Patrick Hiller. “While people should be weary of relying on politicians to fix things, we need to recognize that Congress has the authority to declare war. It is therefore critical to make stopping war with Iran an urgent priority”.

Congress should be urged to support the JCPOA, oppose destructive sanctions, support genuine diplomacy, and exercise its authority to oppose a war of choice with Iran.

The War Prevention Initiative informs and educates about viable alternatives to war and violence.

A CODEPINK delegation of 30 Americans will be traveling to Iran from February 25-March 6  to express their deep concern to the Iranian people about the effect of the Trump  administration’s brutal sanctions, abrogation of the Nuclear Agreement and building a case for war. The delegation is composed of lawyers, journalists, physicians, activists, artists, and other professionals who hope to help move our two nations from a place of hostility and military threats to a place of mutual respect and peace. Delegates will be meeting Iranian academics, students, artists, religious leaders and parliamentarians.

The group will be traveling to Iran just at the time when the Trump administration has been ramping up its opposition to the Iranian government. It organized an anti-Iran gathering in Poland on February 13-14, chastised the Europeans for not joining US-imposed sanctions, and increased its support for fringe opposition groups such as the MEK and royalists.

“Americans should challenge policies of our country that are wrong and harm others,” said retired US Army Colonel and former US diplomat Ann Wright. “The Trump administration’s abrogation of the nuclear agreement and the increased sanctions on Iran are harmful and dangerous, which is why our people-to-people delegation is so important.”

“We are anxious to see firsthand how the sweeping US sanctions are affecting ordinary Iranians so we can come back and convey their stories,” said CODEPINK cofounder Medea Benjamin. “Of course there are tensions between the governments. That makes it more important that we come as good listeners and with the clear message that we don’t want war. There is no reason why we as Americans cannot live in peace with the Iranian people,” said War Prevention Initiative Executive Director, Patrick Hiller.

Please contact Patrick Hiller, War Prevention Initiative’s Executive Director at patrick@jubitz.org or 503 505-5721 (phone upon return) who has joined the delegtation from Oregon for articles, blogs and speaking engagements. 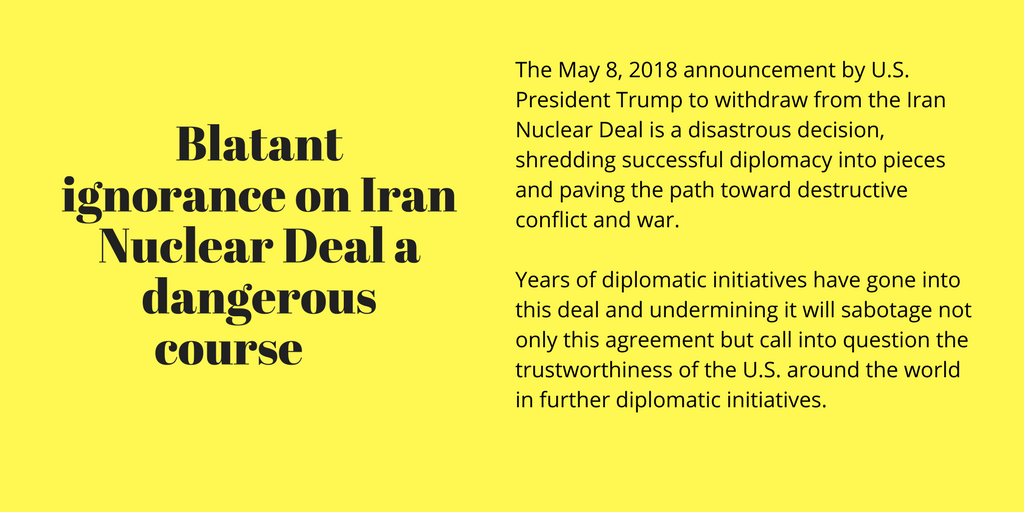 The May 8, 2018 announcement by U.S. President Trump to withdraw from the Iran Nuclear Deal is a disastrous decision, shredding successful diplomacy into pieces and paving the path toward destructive conflict and war. In his announcement, the President continued to display his utter ignorance of the nature and functioning of the deal.

Mr. President, There Are No ‘Winners’ in War

War Prevention Initiative: “Mr. President, There Are No ‘Winners’ in War”

On August 21, President Trump announced his administration’s plan to prolong the war in Afghanistan.

War Prevention Initiative: “Need to disrupt the circle between hate and racism at home and wars abroad”

War Prevention Initiative: “Need to disrupt the circle between hate and racism at home and wars abroad”

Reports suggest that North Korea has advanced its nuclear ambitions with the production of a nuclear warhead designed to fit inside its missiles.

War Prevention Initiative: “There is no military solution to the rising tensions in the Korean peninsula. De-escalate!”

War Prevention Initiative: “There is no military solution to the rising tensions on the Korean peninsula. De-escalate!”

The successful July 4, 2017 test of an intercontinental ballistic missile (ICBM) by the North Korean regime prompted U.S. President Trump to publicly state that North Korea was “behaving in a very very dangerous manner” and that he had “some pretty severe things that we are thinking about”.