Under the theme of “Real Solutions to Real Problems”, the 2020 Rotary World Peace Conference was held in Ontario, CA. War Prevention Initiative Executive Director Patrick Hiller was invited to present on the topic of “Recognizing the Science of Peace to Advance Positive Peace”. He argued that by examining how and where long-term, sustainable peace has been achieved, peace scientists can provide orientation and offer relevant advice toward transforming worldwide militarism and intractable conflicts into cultures of peace and peaceful societies.

Addressing an audience primarily consisting of Rotarians who attended the conference, Patrick suggested that Rotarians can integrate peace research insights into the already existing peace commitments in the real of Rotary. 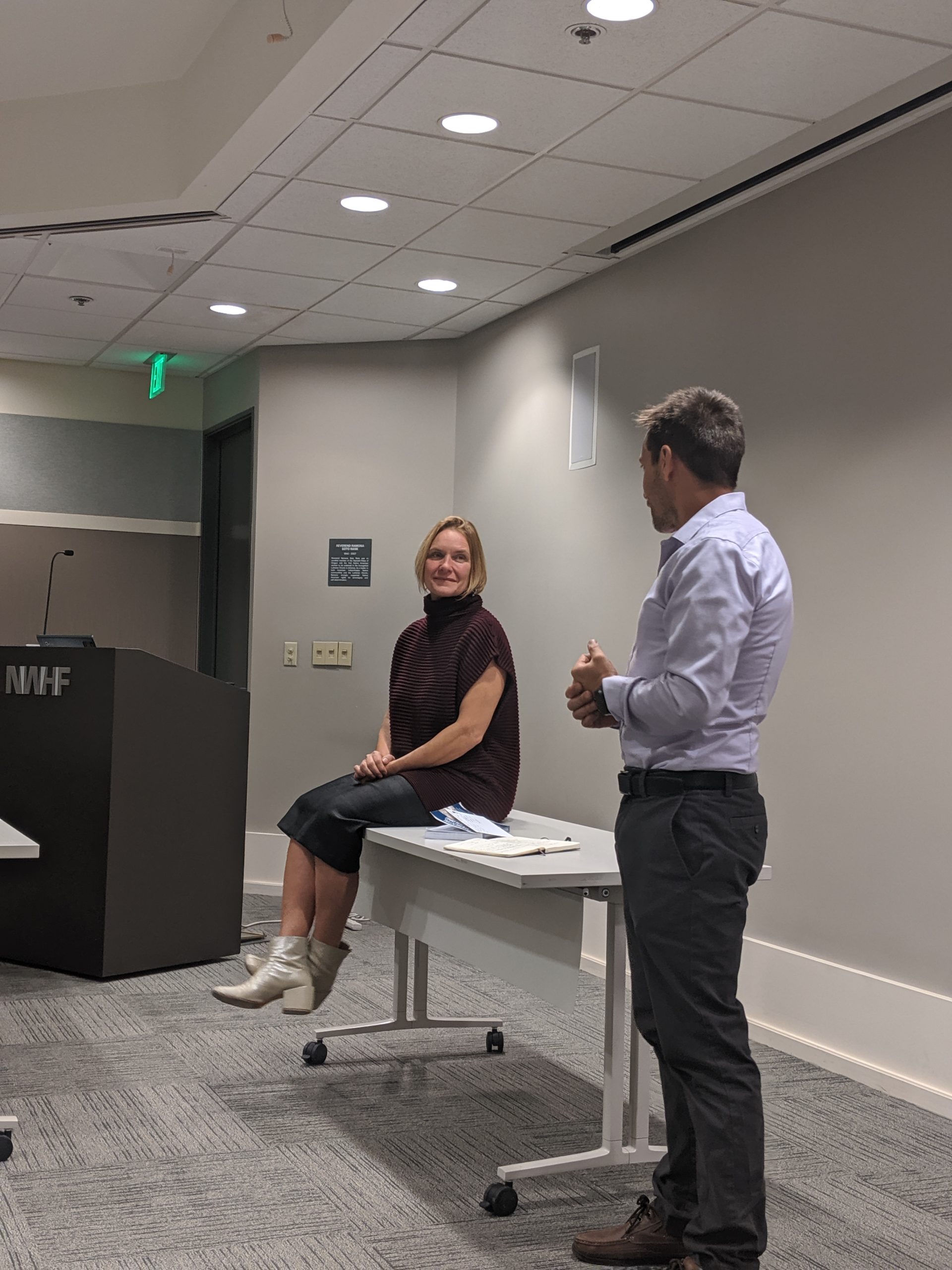 The War Prevention Initiative of the Jubitz Family Foundation was honored to welcome Outward Bound Peacebuilding’s Ana Patel. In a lively and interactive conversation with the audience, Ana brought her long-time work with the center to life. We highly recommended the volume Ana co-edited with her colleague Flavio Bollag. Patrick Hiller, Executive Director of the War Prevention Initiative contributed at chapter on “Nonviolence”.

More about the book: https://outwardboundpeace.org/2019/10/21/publication-of-experiential-peacebuilding/ 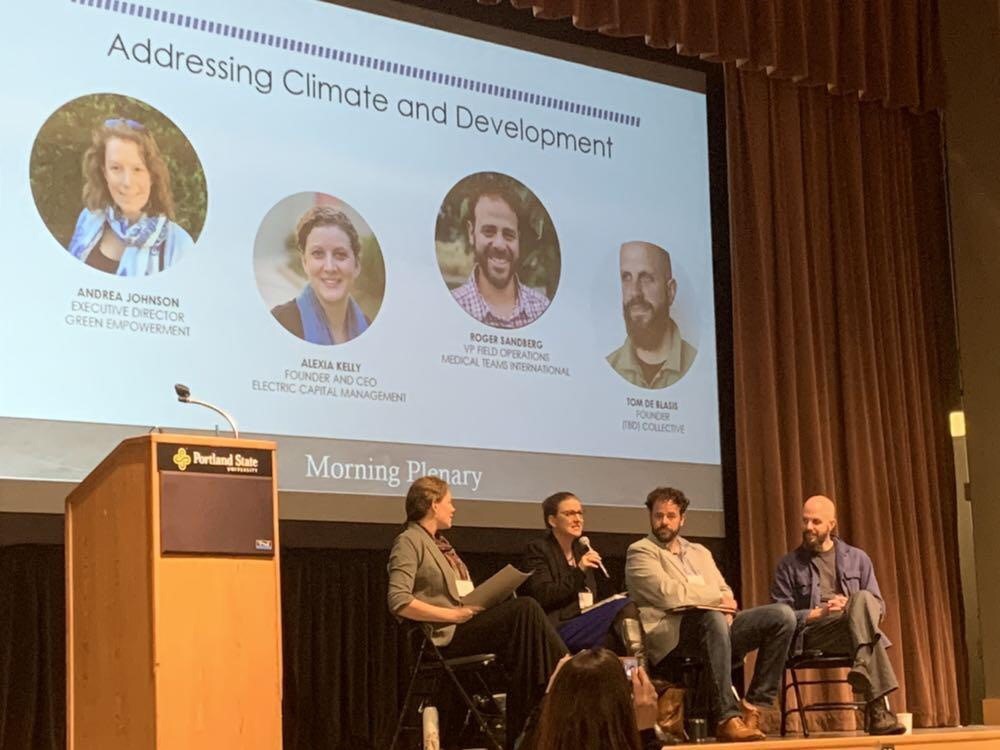 The theme of the conference was Local to Global: Sustainable Solutions for a Changing World. Local nonprofits, development organizations and international charities attended the event to share insights and best practices to address global challenges. The panel discussions and breakout sessions covered a wide range of topics including climate change, the refugee crisis and Portland’s unique context in addressing these challenges. In addition to knowledge exchange, an underlying objective of the conference was to unite and strengthen the international Portland community and foster networking and partnership.

The wide range of topics discussed highlight the plethora of global challenges being tackled by Portland organizations and their novel perspective, which positions them to be most effective. The panel discussion on climate change and development underscored the importance of advancing an intersectional approach to building climate change resilience and shifting the response from reactive to proactive. As noted by the panelists, an ounce of effort spent on prevention costs less than an ounce of effort spent on emergency response. Another key area in which Portland organizations are engaging is refugee assistance. Recently the U.S. has curbed the flow of refugees into its borders, but the need remains high for refugee resettlement. Frequent climate shocks, which are only predicted to worsen, and the associated conflicts are a significant motivating factor for people to relocate. A consistent theme of the conference was that Portland is uniquely situated to cultivate a response to many global challenges. The progressive spirit of Portland remains a force to be reckoned with, as evidenced by the creation of the Portland Clean Energy Fund through ballot initiate and the commitment to passing environmental legislation, namely HB 2020 and similar bills, in the next year.

War Prevention Initiative was honored to attend the conference and we look forward to building partnerships with local organizations to advance our mission of a world beyond war.

Kelsey Coolidge, program manager at the War Prevention Initiative, attended the First International Conference on Environmental Peacebuilding in Irvine, California. She participated as a discussant on a panel discussion on design, monitoring, and evaluations in environmental peacebuilding.

Kelsey Coolidge, program manager at the War Prevention Initiative, presented Developing a Monitoring and Evaluation Framework for Communicating Peace at the M&E Solutions Forum hosted by the Alliance for Peacebuilding in Washington, D.C. This presentation reviewed the design of the monitoring and evaluation framework for the Peace Science Digest. For the remainder of the week, Kelsey Coolidge attended PeaceCon 2019: Seizing the Moment for Peace in A Disrupted World. This annual conference is a meeting place for various organizations, academics, government officials, military officials, and others involved in the field of peace and security. 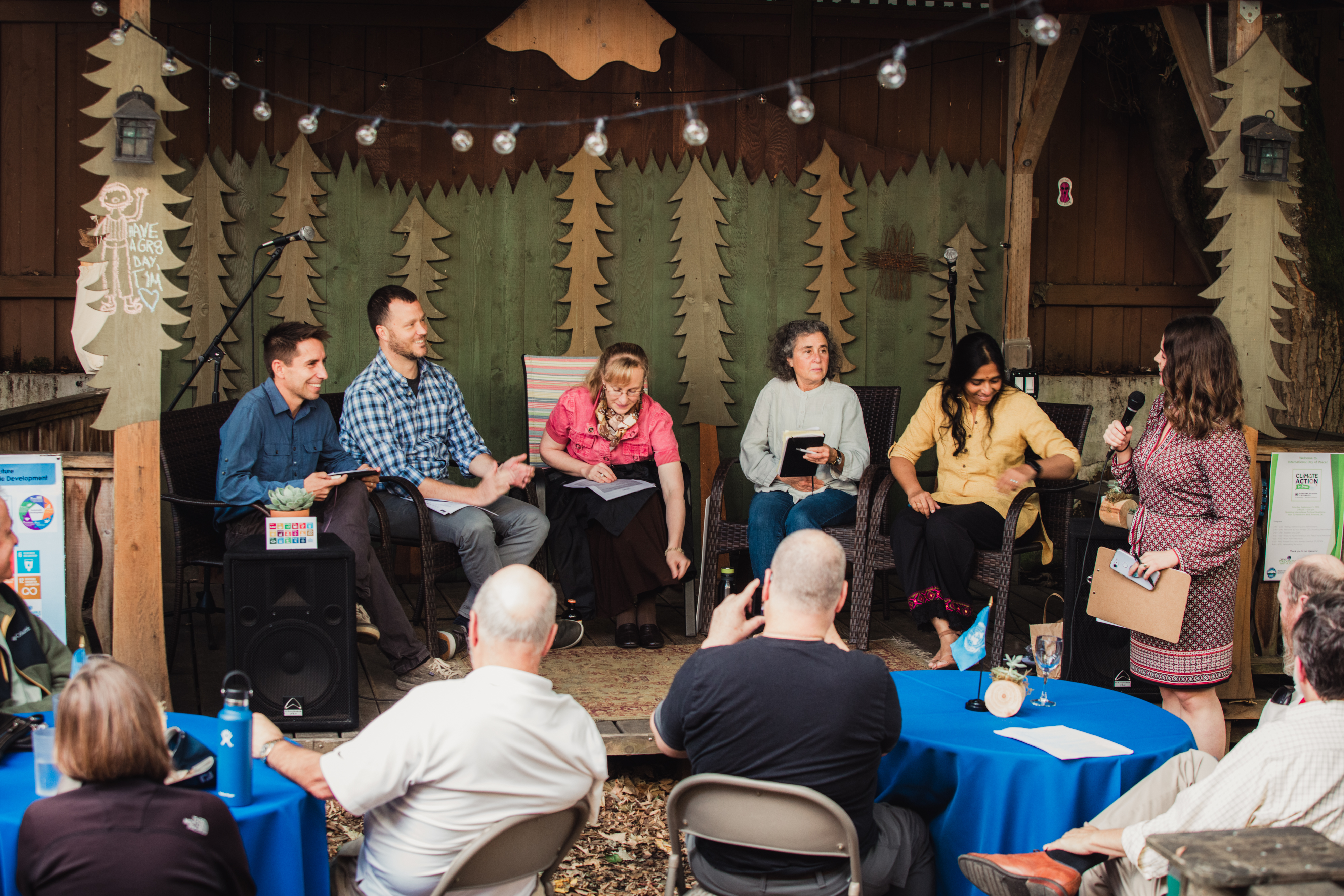 The War Prevention Initiative co-hosted a World Peace Day event on this year’s theme of Climate Action for Peace with numerous Portland-area non-profit organizations, including the Greater Portland Sustainability Education Network (GPSEN), the Hawthorne Hostel, and the United Nations Association of Portland. The event focused on the linkages between climate change and peace by hosting a panel discussion with Portland-area experts, who presented on the various aspects of the relationship between peace and climate change. Patrick Hiller (War Prevention Initiative), Jason Jurjevich (Portland State University Population Research Center), Deidre Schuetz (Citizen’s Climate Lobby), Neeraja Havaligi (GPSEN), and Maxine Fookson (Oregon Physicians for Social Responsibility) participated on the panel and Kelsey Coolidge (War Prevention Initiative) moderated. A peace pole dedicated took place after the panel with a speech from Reem Ghunaim (Rotarian Action Group for Peace). The event ended with a series of cultural activities and networking for participants. 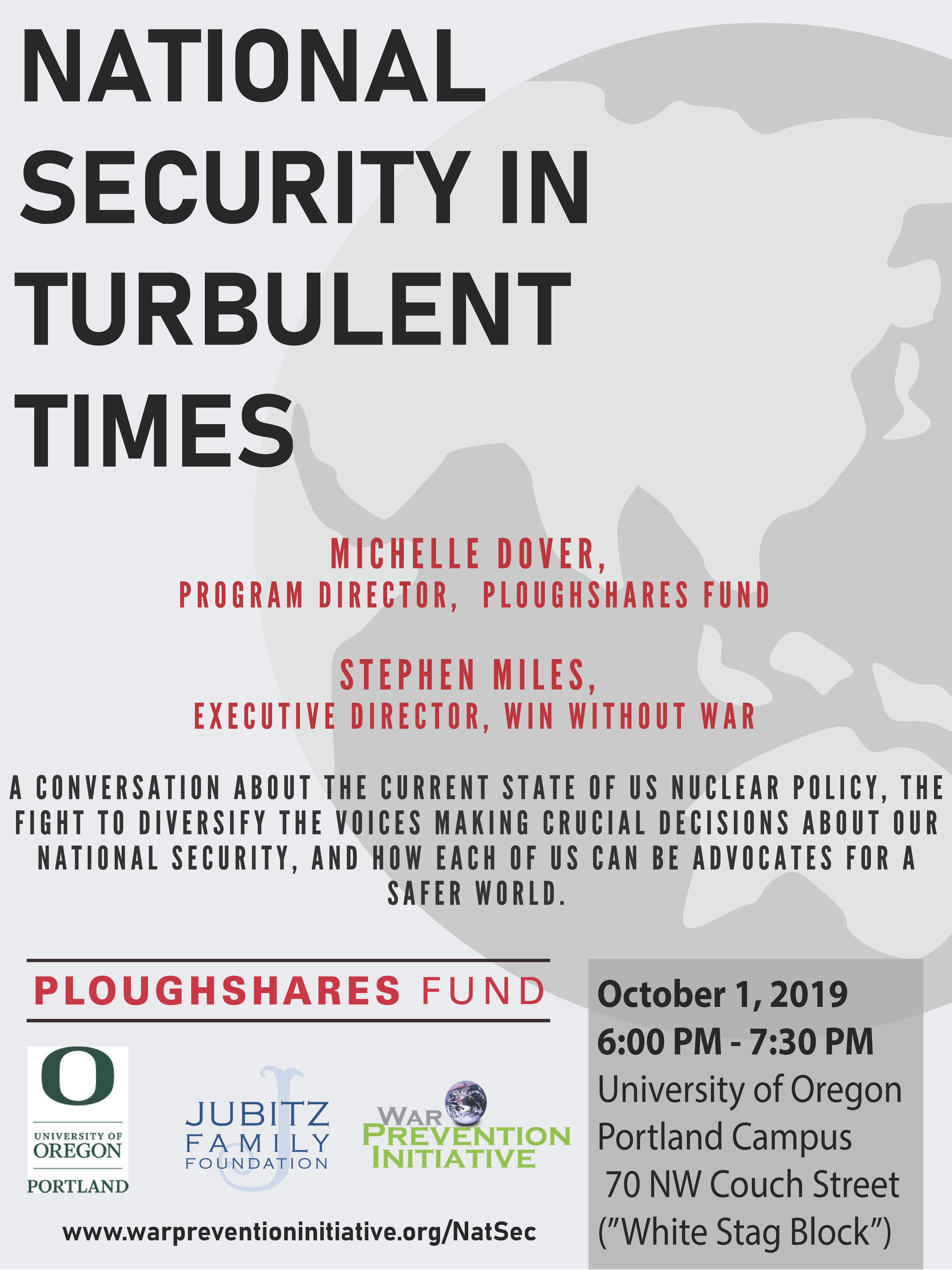 As residents of the Pacific Northwest, with historical connections to the production of our country’s nuclear weapons and our proximity to the third-largest nuclear arsenal in the world in Seattle, we have a unique perspective and role in shaping the conversation around national security and nuclear policy.

Michelle Dover, program director at Ploughshares Fund, and Stephen Miles, executive director at Win Without War, are experts in the national security field. Visiting from DC, they’ll join the Jubitz Family Foundation for a conversation about the current state of US nuclear policy, the fight to diversify the voices making crucial decisions about our national security, and how each of us can be advocates for a safer world.

Ploughshares Fund, Win Without War, and the Jubitz Family Foundation work together with policymakers, experts, media, and advocacy groups to advance national security and foreign policies to make us all safer.

Michelle Dover is Program Director at Ploughshares Fund, providing strategic guidance on grantmaking and performance. Michelle is a former researcher at the Center for Nonproliferation Studies and Nonproliferation Fellow at the NNSA. Michelle graduated from University of Denver and American University, studying international relations and conflict resolution. Michelle is originally from Walla Walla and Tri-Cities, Washington.

Stephen Miles is the Executive Director of Win Without War. Stephen is a veteran of campaign politics with a strong background in grassroots advocacy. He previously worked for the global campaigning organization Avaaz, as well as on multiple federal, state, and local electoral campaigns, and as the Executive Director of the American Hellenic Council. Stephen is a graduate of the London School of Economics and Tulane University with academic expertise in humanitarian interventions and Middle Eastern politics. 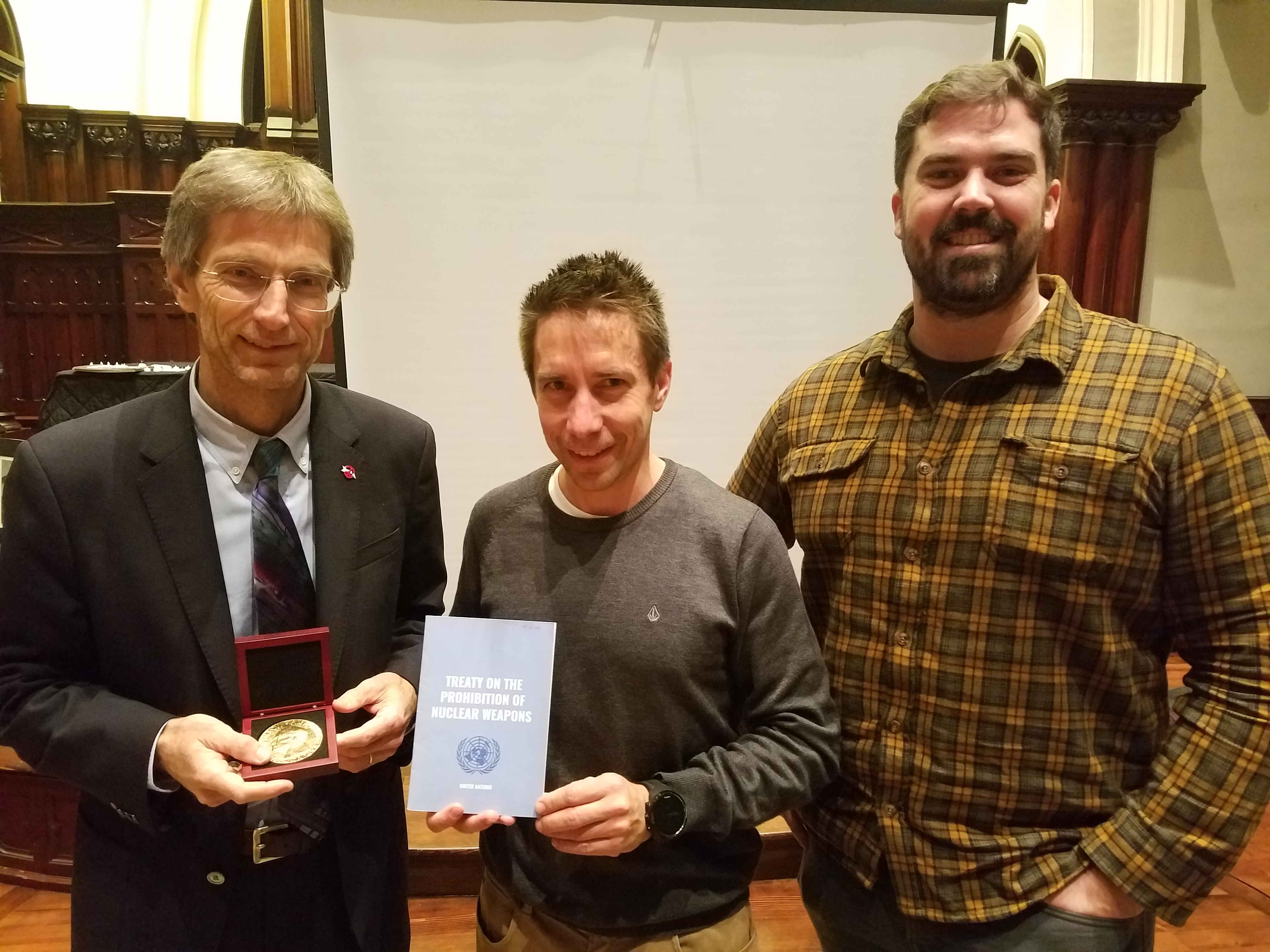 The War Prevention Initiative was honored to co-host Nobel Peace Laureate Tilman Ruff from the International Campaign to Abolish Nuclear Weapons. As members of this international civil society campaign, it was a privilege to meet and listen to one of campaign’s co-founders. Ruff gave a talk entitled Before They End Us: The New Global Movement to End Nuclear Weapons and Protect Planetary Health, a discussion about nuclear weapons and the nuclear disarmament movement. 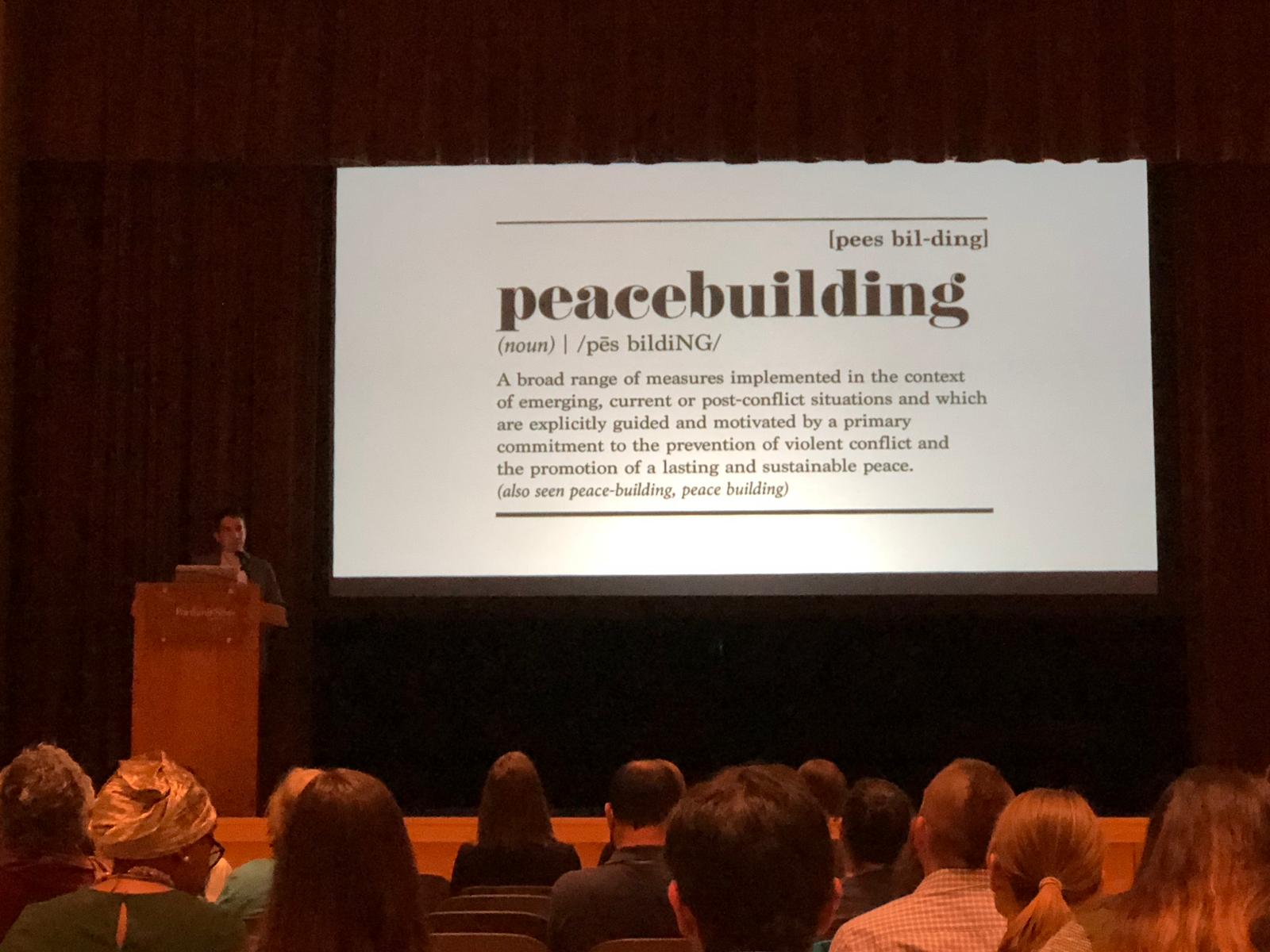 Recognizing the many positive opportunities, Hiller suggested that business as usual was not an option and that if we concentrate on helping and forget to criticize the root causes, we are to a certain degree legitimizing those. 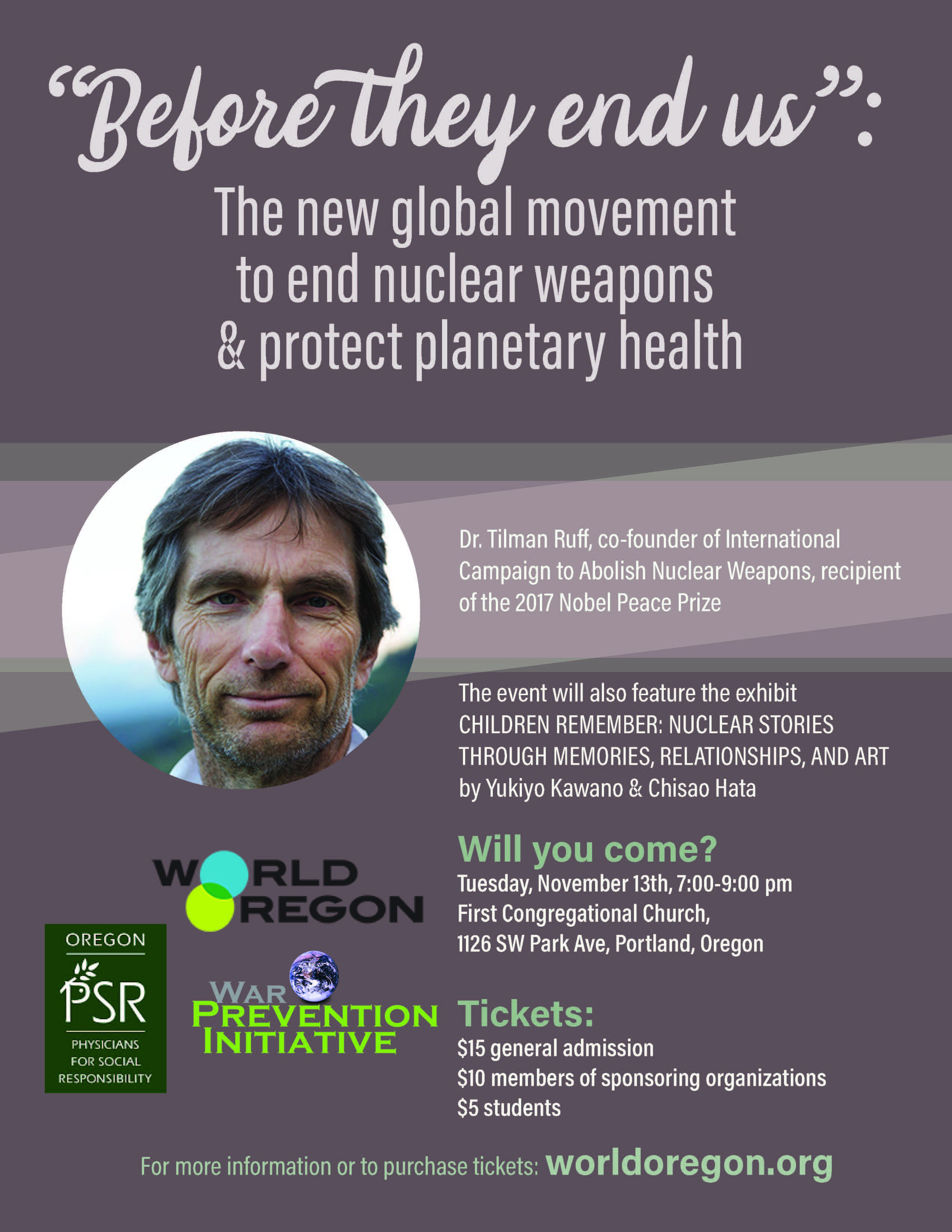 Before They End Us: The Global Movement to End Nuclear Weapons and Protect Planetary Health

First Congregational Church in Portland, OR
Please join Oregon PSR, WorldOregon, and the War Prevention Initiative of the Jubitz Family Foundation for Before They End Us: The New Global Movement to End Nuclear Weapons and Protect Planetary Health, a discussion about nuclear weapons and the nuclear disarmament movement featuring Dr. Tilman Ruff.

Dr. Tilman Ruff is Co-President of International Physicians for the Prevention of Nuclear War (IPPNW, Nobel Peace Prize 1985) and founding international and Australian Chair of the International Campaign to Abolish Nuclear Weapons (ICAN), awarded the Nobel Peace Prize in 2017 “for its work to draw attention to the catastrophic humanitarian consequences of any use of nuclear weapons and for its ground-breaking efforts to achieve a treaty-based prohibition of such weapons.”

The event will also feature the exhibit Children Remember: Nuclear Stories Through Memories, Relationships, and Art by artists Yukiyo Kawano and Oregon PSR Advisory Board member Chisao Hata. This powerful exhibit arose out of a collaboration between atomic bomb survivors, or hibakusha, and high school student artists living in Hiroshima, and is an evocative exploration of the tragedy of nuclear weapons use.

Purchase your ticket(s) today, and we look forward to seeing you on Tuesday, November 13th!

Download the event flyer and help us spread the word.